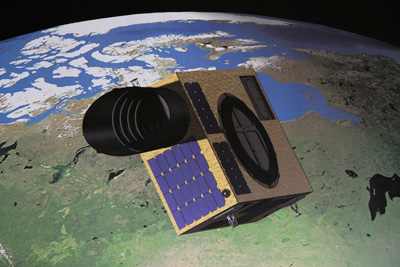 After a successful launch yesterday aboard an Indian rocket, Canada’s critical Sapphire and NEOSSat satellites along with the other satellites launched have all communicated with ground control and appear to be working fine.

MacDonald, Dettwiler and Associates Ltd.(MDA), the prime contractor who built Sapphire for the Department of Defence, said that communication with the satellite has been established.
Daniel Friedmann, MDA’s president and CEO said, “We are very pleased to see the Sapphire satellite successfully launched. This is MDA’s first solution for the growing space surveillance market. Studies have shown that with increases in space debris, and the threat to the systems and services growing, space-based space surveillance will become more and more crucial to provide collision avoidance capabilities and prevent system and service loss.”
MDA will operate and maintain the Sapphire for five years following its commissioning which is expected to take approximately three months.
MDA said its “responsibilities include relaying assigned taskings from DND to the satellite, processing the collected information, and sending the data to the Sensor System Operations Centre (SSOC) operated by DND at 22 Wing in North Bay, Ontario. Upon receipt of the processed data, the SSOC will correlate, identify, archive and transmit the information to the United States’ Joint Space Operations Center (JSpOC).”
Other Sapphire contractors include Terma A/S of Herlev, Denmark, COM DEV International of Cambridge, Ontario, and Surrey Satellite Technology Ltd. of Surrey, England.
COM DEV provided the Sapphire optical payload which consists of the Optical Imaging Subsystem (OIS) and the Data Handling and Control Subsystem (DHCS).
According to COM DEV the “OIS is a visible-band telescope housed with a low noise preamplifier and a focal plane that will acquire a series of images for each target object in space. The DCHS contains primary and redundant electronics which can correct the images that have been captured and compress the image data before it is transmitted to a ground station for additional processing.”
NEOSSat has also established communications with ground stations said Alan Hildebrand, one of the project’s lead scientist who is based out of the University of Calgary.
Global TV Calgary Interview with Rob Cardinal of the NEOSSat Team Post Launch

Boucher is an entrepreneur, writer, editor & publisher. He is the founder of SpaceQ Media Inc. and CEO and co-founder of SpaceRef Interactive LLC. Boucher has 20+ years working in various roles in the space industry and a total of 30 years as a technology entrepreneur including creating Maple Square, Canada's first internet directory and search engine.
@marckboucher
Previous Indian Rocket Launches Canadian Satellites
Next MDA Wins Contract to Build Mapping System for Asteroid Sample Return Mission