The International Space Station had just passed over the provinces of Quebec and Newfoundland and Labrador at 12:30 pm.m EDT when Hadfield joined hundreds of students gathered at the Ontario Science Centre via teleconference. CSA Astronaut Jeremy Hansen was present to greet Chris and moderate a question and answer period with Commander Hadfield after the song.
Music Monday takes place the first Monday in May to raise awareness about the importance of music education. Canadians of all ages and singing experience were encouraged to sing the same song at the same time. The song they sang – I.S.S. (Is Somebody Singing), is a song Hadfield co-wrote with Ed Robertson of the Barenaked Ladies. The song was commissioned by the Coalition for Music Education and CBC Music.
Other performances included a song written band performed by Hadfield’s brother Dave. He sang “Big Smoke” with a choir from the Chris Hadfield Public School which is located in Milton Ontario.
After five months aboard the ISS, Commander Hadfield is scheduled to return to Earth in one week, on Monday, May 13. 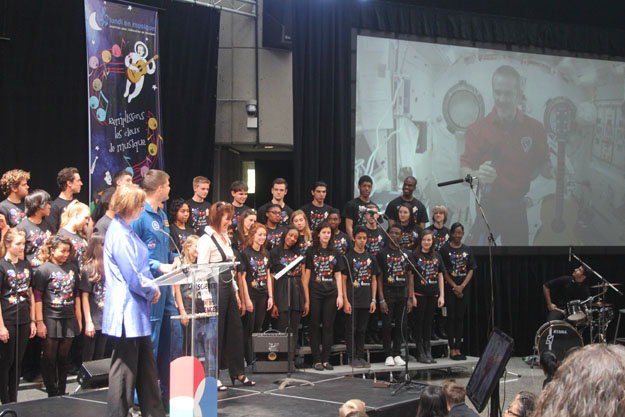 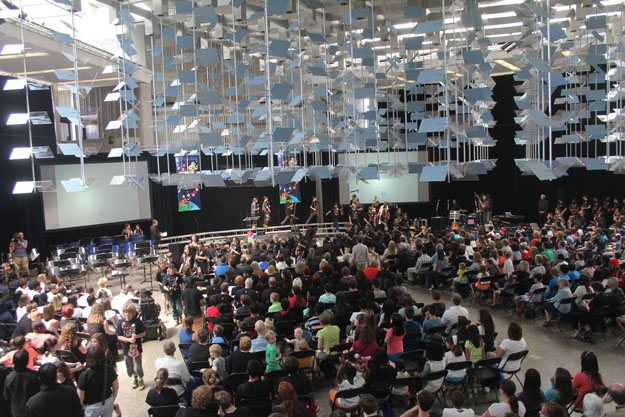 Music Monday activities in the Great Hall at the Ontario Science Centre in Toronto. Credit: SpaceRef