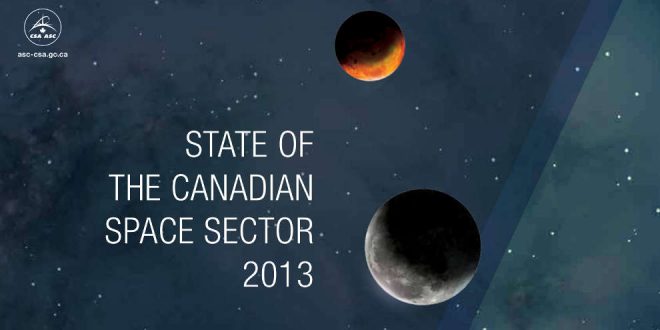 Canadian Space Agency Releases the 2013 State of the Space Sector

The Canadian Space Agency (CSA) has released the 2013 State of the Space Sector report. This is the last report that will be using the current methodology. Starting next year the report will use an updated Organisation for Economic Co-operation and Development (OECD) methodology which the CSA contributed to.

According to the CSA “to better reflect the current best practices and for matters of consistency with the approach recommended by the OECD, the CSA will, as of next year, transition to a new methodology that characterizes Canadian space activities on the basis of an Upstream-Downstream Value-Chain approach. The CSA will provide the reader with tools to help bridge the historic data and reporting with the new methodology.”

This is in part reflected in the socio-economic study from last year which was completed by Euroconsult Canada for the CSA. That report, which has not been released, will soon be released.

Using the new methodology should show an increase in overall revenues as revenue streams previously unaccounted for, will be included.

Executive Summary for the 2013 Report

The space workforce continued to grow in 2013, with a 3% increase, or 238 additional fulltime positions, compared to 2012 results. However, contrary to the 2012 results, those new positions were mostly added in administration, marketing, management or other areas of employment as opposed to highly qualified positions.

The downstream segment, captured through Applications and Services, continues to account for the majority of space revenues at $2.4B in 2013. Space Research revenues increased by 3%, or $1M. Ground Segment revenues declined by 4%, or $14M. Space segment revenues were relatively flat, with a slight 1% increase, or $8M.

Revenues derived strictly from manufacturing activities have increased by nearly 9% over 2012 results, reaching $750M of the total $3.5B space revenues.

Boucher is an entrepreneur, writer, editor & publisher. He is the founder of SpaceQ Media Inc. and CEO and co-founder of SpaceRef Interactive LLC. Boucher has 20+ years working in various roles in the space industry and a total of 30 years as a technology entrepreneur including creating Maple Square, Canada's first internet directory and search engine.
@marckboucher
Previous New Canadian Small Satellite Conference Caters to a Growing Demand
Next Neptec to Develop a New Advanced Space Vision System for the International Space Station