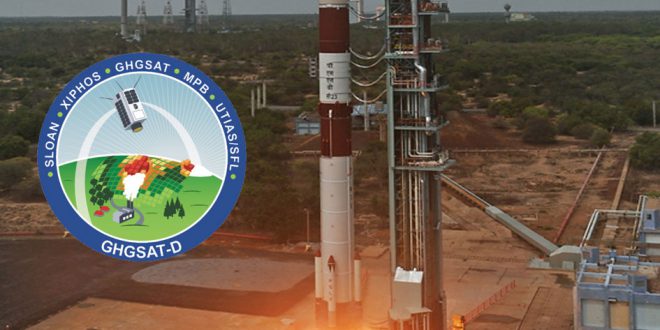 A Canadian demonstration small satellite, CLAIRE by GHGSat, is scheduled to launch on June 21 at 23:57 p.m. EDT (June 22, 03:57 GMT) on an Indian rocket as part of a secondary payload of smaller satellites to be launched. The primary payload is the Indian Cartosat 2C high-resolution earth observation developed by the Indian Space Research Organisation (ISRO).

CLAIRE is outfitted with sensors that will enable it to measure greenhouse gas emissions from industrial facilities around the world.

GHGSat’s mission is to become the global reference for remote sensing of greenhouse gas (GHG) and air quality gas (AQG) emissions from industrial sites, using satellite technology.
The satellite was developed with a team of partners that included Xiphos Technologies, the Space Flight Laboratory at the University of Toronto’s Institute for Aerospace Studies, and MPB Communications.

Funding for the demonstration project was provided in part by the Canadian Space Agency. The contract from the government allowed GHGSat to develop a beta version of a new and innovative application of Earth Observation (EO) data to better serve GHGSat’s customers in the oil sands. The primary objective of the application is for use in the monitoring of greenhouse gas emissions from the oil sands and tailings ponds.

A live webcast of the launch will be available on an India’s public service broadcaster Doordarshan website.

Boucher is an entrepreneur, writer, editor & publisher. He is the founder of SpaceQ Media Inc. and CEO and co-founder of SpaceRef Interactive LLC. Boucher has 20+ years working in various roles in the space industry and a total of 30 years as a technology entrepreneur including creating Maple Square, Canada's first internet directory and search engine.
@marckboucher
Previous Famed Photographer Alan Dyer Starts Kickstarter Campaign for Astrophotography Tutorial
Next National Defence Minister to Make Space-based Surveillance Announcement at MDA Headquarters