A Canadian high school team will be the first ever to fly a payload in a European sounding-rocket student competition.

Philip Stachura, Ryan Rizzo, Ethan Rajkumar and Yousef Mian are the four team members from St. Thomas More Collegiate, an independent school in Burnaby, B.C, who will participate in CanSat. Advising them is Joe Muise, a physics and astronomy teacher at the school. The launch campaign will take place in Bologna, Italy between June 24 and June 28.

Muise first heard of the competition last year while attending a European Space Agency (ESA) workshop on robotics in Belgium with the financial support of his school. Because Canada is an associate member of ESA, he explained, Canada was eligible to apply to this competition – something that few secondary teachers in this country may know, he added.

CanSat is a competition run by ESA, with the aim to increase student engagement in STEM (science, technology, engineering and mathematics). Each team creates a soda can-sized “CanSat”, which is launched 1 kilometre high on a sounding rocket and then released.

As part of the competition, the satellites include probes that must record and transmit data during the descent. Each team is required to gather pressure and temperature data. Canada’s CanSat team – who call themselves STM-CanadaSat – will take on another challenge, too: creating a topographical map of the region in visible and infrared wavelengths.

“It’s a bit of a challenge,” Muise said. “Other groups have tried it and not succeeded.” He explained that’s because the CanSats tend to wobble quite a bit during the descent, blurring the images. So the kids are examining alternatives such as stabilizing the platform, or increasing the frame rate on the cameras on board.

Each of the students is doing this work on top of their normal final-year studies in high school. A critical design review by the students explains that the Canadians spent two hours a week doing the work in school, as well as anywhere from one to four hours a week working at home. And already, the payoff is clear: all four students have been accepted into post-secondary programs for fall 2019, Muise said.

He said the experiential learning is really showing students the real-life applications of the learning they already have experience with in school. Muise makes every effort to offer opportunities like this to his students, such as field trips to The Saskatchewan Centre for Cyclotron Sciences, but added that he regrets not having time and resources to do this sort of activity with everyone.

Sponsors and supporters for the Canadian team include:

The students are also raising $11,000 for their travel expenses to Belgium, through a tax-deductible fundraising campaign on the school’s webpage. About 10% of expenses have been raised so far. To help out, you can go to the fundraising page here: https://stthomasmorecollegiate.ca/support-stmc/cansat-competition-fund/.

Is SpaceQ's Associate Editor as well as a business and science reporter, researcher and consultant. She recently received her Ph.D. from the University of North Dakota and is communications Instructor instructor at Algonquin College.
Previous Alberta Students Present Their Living Space Project Results to David Saint-Jacques
Next Opinion: Farewell to the “Humble” Satellite – See You in 400 Years 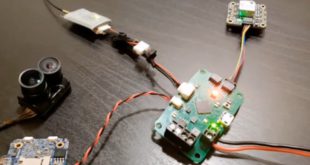