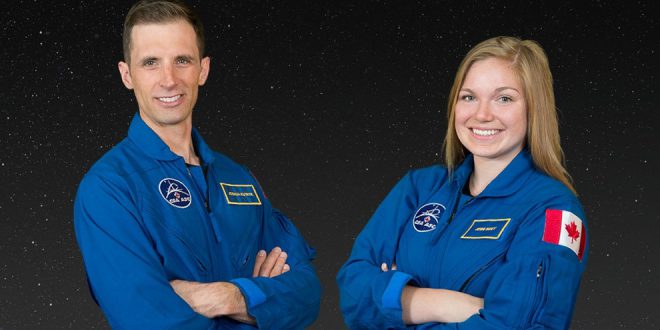 Born in Calgary, Alberta, Dr. Jenni Sidey studied at McGill University in Montreal, Quebec, and at the University of Cambridge, United Kingdom, where she was an engineer and lecturer until being recruited as an astronaut.

Lieutenant-Colonel (LCol) Joshua Kutryk hails from Fort Saskatchewan, Alberta. He studied at the Royal Military College of Canada in Kingston, Ontario, as well as in Florida and Alabama. Prior to joining the Canadian Space Program, LCol Kutryk worked as an experimental test pilot and a fighter pilot in Cold Lake, Alberta, and as a CF-18 fighter pilot in Bagotville, Quebec.

Prime Minister Trudeau said “today, as we celebrate Canada’s 150th birthday, we also look towards an exciting future of space exploration. We are a society of creative thinkers, explorers, innovators. As we embark on Canada’s next 150 years and beyond, we can count on these two Canadians to help shape our future.”

Navdeep Bains, Minister of Innovation, Science and Economic Development said “Canada’s participation in space is important for scientific discovery and innovation. The technologies that are designed for space today can one day be used to improve the lives of all Canadians. These innovations also have the potential to create new jobs and opportunities for Canadians. Our country’s newest astronauts will play a key role in advancing space technologies while pushing the frontiers of scientific knowledge. That’s how Canada’s space program drives innovation for a better Canada.”

The press release went on to say “the nation’s newest astronauts are being named as space agencies around the world identify options for future missions that go beyond the International Space Station .” The missions they they are referring may include the moon.

Boucher is an entrepreneur, writer, editor & publisher. He is the founder of SpaceQ Media Inc. and CEO and co-founder of SpaceRef Interactive LLC. Boucher has 20+ years working in various roles in the space industry and a total of 30 years as a technology entrepreneur including creating Maple Square, Canada's first internet directory and search engine.
@marckboucher
Previous SpaceQ Podcast Episode 4 – Gears, Transmissions and Moon Rovers, the ODG Story
Next Canadian Space Pioneer Garry M. Lindberg Appointed as a Member of the Order of Canada