This is a Mosaic of Canada which is made from 121 images captured by Canadian satellite RADARSAT-2. Credit: Canadian Space Agency.
Share

It’s been much anticipated, and now the Government of Canada is moving forward with a consultation to define what Earth Observation systems Canada should consider as a follow-on to the RADARSAT Constellation Mission.

Last summer Canada’s flagship trio of Earth Observation (EO) satellites, the RADARSAT Constellation Mission (RCM), was launched and is now operational. RCM is scheduled to operate until at least 2026.

Yet even before the launch many stakeholders were already wondering what comes next.

Today the government issued a Notice of Possible Procurement (NPP) officially titled Option Analysis Studies for Earth Observation for Service Continuity. The announcement is just the first step towards the goal of creating follow-on EO systems that would meet Canada’s need from 2026 until 2041.

The process is being coordinated by the Canadian Space Agency (CSA). Proposals are due by March 20, 2020. Up to five may be selected and with a maximum contract value for each of $1 million.

Along with the tender notice posted today, the CSA issued a press release. It includes the following quote from Innovation, Science and Industry Minister Bains.

“In a country as vast as ours, Earth observation data helps our government to make evidence-based decisions to keep Canadians safe, protect our environment and manage our country’s natural resources. We are now planning for the RADARSAT Constellation Mission’s successor so that Canadians can continue to benefit from important services empowered by space.”

The CSA defined the consultation as follows:

The third generation of RADARSAT-brand satellite systems, the three-satellite RADARSAT Constellation Mission (RCM), has been launched in 2019 and is expected to operate until at least 2026. Once operational, this system will provide Canada with continued and independent access to SAR data, a critical Earth Observation capability that supports a wide range of Government operations.

Given the significant planning and financial investments required to deliver a major satellite project, the Canadian Space Agency (CSA) and key federal partners are beginning planning for the next generation of SAR Earth Observation systems in order to ensure that Canada is able to seamlessly maintain this capability and enhance the operational services beyond 2026.

To this end, the CSA have consulted key federal partners to gather inputs on Canada’s future Earth Observation needs, with a focus on the SAR data needs, with the objective to provide the recommendations on the way forward to ensure EO Service Continuity for Canada.

Any new EO systems will take into account what’s already been done and how it was achieved and the NPP delves into this in the background objectives;

Based on its experience in developing and launching three iterations of the RADARSAT family of Synthetic Aperture Radar (SAR) satellites, and through extensive consultation with partner departments across the federal government, the Canadian Space Agency (CSA) has developed a more thorough understanding of all of the elements that are needed to ensure it is able to capture, store and disseminate useful EO data over Canada and other areas of interest to the GoC and industry. In particular, the CSA is focused on identifying a suitable end-to-end solution – that includes a space segment, ground infrastructure, and data exploitation- that is able to provide a centralized access to user-friendly data products and applications meeting GoC needs while also helping to support growth and competitiveness across Canada’s EO Industry.

The NPP then states what opportunities need to be taken into consideration when looking at future EO systems;

Given this evolved understanding of what the GoC’s future space-based EO system aspires to be, the following opportunities have to be taken into consideration, as key objectives of a RCM follow-on system. It should be noted, however, that these considerations are, in addition to the primary focus on the continuity of the services enabled by the RCM:

DND may yet take a different path

By-and-large, the Government of Canada, led by the CSA has been a taking a Whole of Government of approach to EO. However, a lesson learned from the RCM is that this approach might meet the needs of most departments, but not all.

The Department of National Defence (DND) is one of those stakeholders that has different and evolving needs, and the NPP notes that saying;

While these considerations are key to most federal government departments, DND and the Canadian Armed Force’s (CAF) requirements differ, largely based on the need for higher levels of security and resiliency in a next-generation system. By and large, the need for heightened security and resiliency on a RCM follow-on system is not shared by other GC departments and agencies. It is for this reason that both DND and the CSA are issuing concept studies to collect detailed information on what a next-generation system could look like. Following the completion of all studies, however, both organizations will work together to review concepts and to determine where there is interdependencies or overlap between them.

So while all departments worked towards the common goal with RCM, and will for future EO systems, DND however might take different path for some EO systems.

If you’ve been following our ongoing coverage of DND, you’ll know they’ve already issued several proposals for micro-satellites with a variety of capabilities.

Boucher is an entrepreneur, writer, editor & publisher. He is the founder of SpaceQ Media Inc. and CEO and co-founder of SpaceRef Interactive Inc. Boucher has 20 years working in various roles in the space industry and a total of 27 years as a technology entrepreneur including creating Maple Square, Canada's first internet directory and search engine.
@marckboucher
Previous DND Selects Seven Engineering and Costing Proposals for Space-Based Surveillance System
Next The Canadian Astronomical Society Issues a Statement on Satellite Constellations 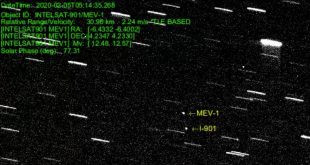