The Ottawa Citizen article “Rocket Science” which appeared in yesterday’s paper was over simplified and got even some of the basic facts wrong. I do however agree with the message of the article that the Government, and in particular Minister of Industry Tony Clement, needs to be proactive and release a new Long Term Space Plan for the Canadian Space Agency (CSA).

And while the Citizen is correct that the last named Long Term Space Plan was released in 1994 it actually did have a successor in the Canadian Space Strategy which was approved on November 12, 2003 and subsequently released.

It is also ridiculous to simplify the strategy of the U.S space progam as just canceling the Constellation program, doing more science and building a better launch vehicle. The redefining of NASA’s vision and in particular its human exploration program is in fact a very complicated ongoing process. While the President may have laid out his vision, the budget is not a done deal and there is a lot of back room maneuvering ongoing. Congress will certainly have its say and the final budget will look different than its current form. Billions have already spent on the Constellation program and jobs are at stake in several states where NASA centers are located.

For Canadians though the more pressing issue is how what will be Canada’s response to the U.S. space program shift.

The diagram below shows the Canadian Space Agency strategic planning tree of 2003 and while a new Long Term Space Plan will have some changes, the main thrusts should be relatively similar. 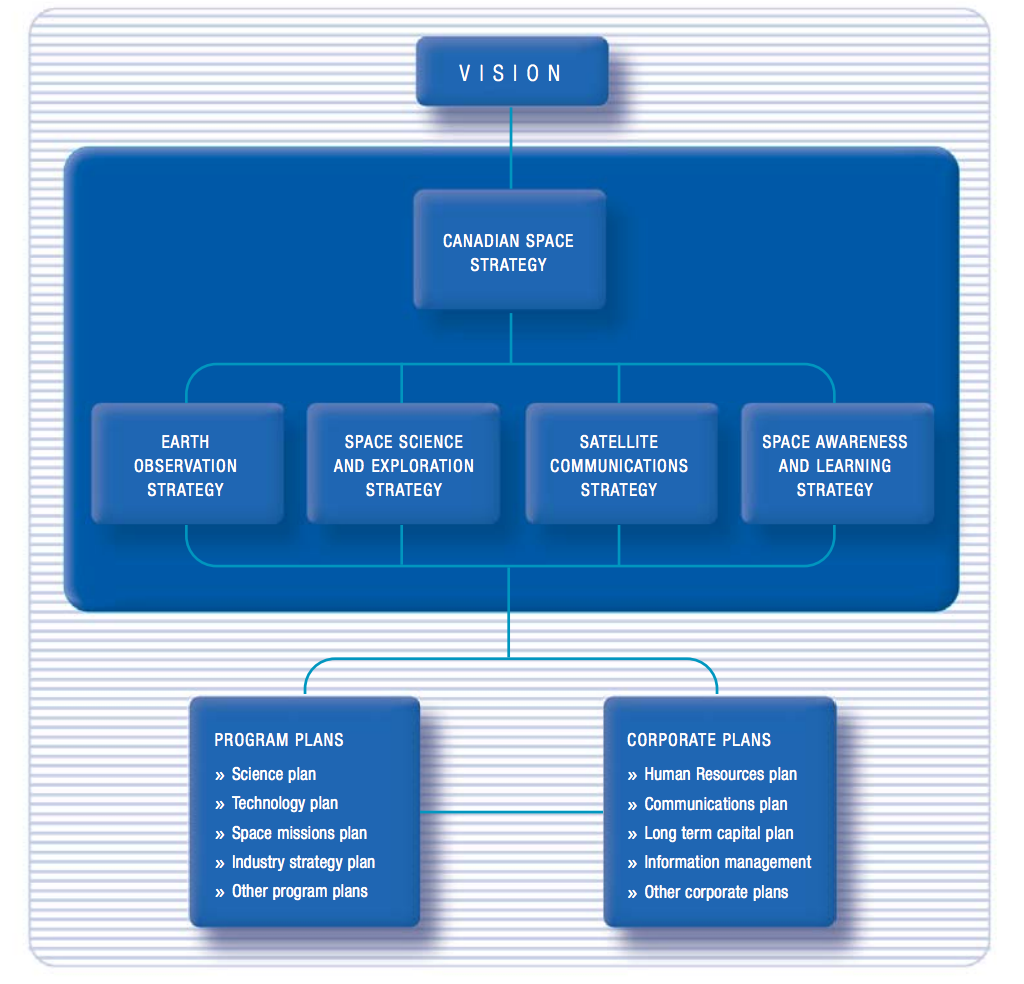 What is in flux is the Space Science and Exploration Strategy thrust. Washington is not the only place where back room maneuvering is ongoing. In Ottawa and St. Hubert there is also a lot of internal politicking ongoing for various programs and directions for the CSA.

The Canadian astronaut core still exists but currently has no missions to fly. The space shuttle will be retired most certainly within the next year or so and the U.S. has no replacement launch vehicle. Canadian astronauts will have to rely on the Russians for a ride to the International Space Station, although contractually the U.S. should pay for at least one ride.

But if the U.S. is not going back to the moon then what of the plans the CSA had been making to work Internationally on supporting this effort? This is where the CSA has been cagey in not releasing any Long Term Space Plan. While not publicly committing itself to any particular plan it has left itself maneuvering room to adjust to the shifting winds in the U.S. And while it was assumed that last falls request for proposals was destined for the moon or Mars the technology itself could be useful for other destinations such as Near Earth Objects, which appear to be in favour now in the U.S. space program along with visiting the moons of Mars.

What is clear is that Canadians need to, have a right to know what direction the Canadian Space Agency is going to take. It is up to the government to release the next Long Term Space Plan. The time to do is no later than this spring.

Boucher is an entrepreneur, writer, editor & publisher. He is the founder of SpaceQ Media Inc. and CEO and co-founder of SpaceRef Interactive LLC. Boucher has 20 years working in various roles in the space industry and a total of 30 years as a technology entrepreneur including creating Maple Square, Canada's first internet directory and search engine.
@marckboucher
Previous This Week in Space for Canada
Next This Week in Space For Canada