OTTAWA – The hard sell is on. NASA wants Canada to get involved in its lunar space station. The Trudeau government hasn’t committed yet, but one minister promises Canada will have a long-term space strategy before the end of the administration’s mandate in late 2019.

NASA’s Jim Bridenstine was clear at today’s Canadian Aerospace Summit, in a speech to several hundred delegates largely composed of aerospace executives and government representatives: “I am here, as the NASA administrator, to ask for the support of Canada in support of Space Policy Directive 1 – our return to the moon.”

The Trump administration directive, issued a year ago, calls for construction of a Lunar Orbital Platform-Gateway in the 2020s to help NASA get used to human deep-space exploration on its quest to eventually run human Mars missions.

“We can’t achieve what we want to achieve in space if any of us goes alone,” Bridenstine added to delegates attending the Aerospace Industry Association of Canada (AIAC) conference. “We want you [Canada] involved in our return to the moon in a big way. Of course, we certainly would love to see robotics on the Gateway.”

But Navdeep Bains – the minister whose portfolio includes the Canadian Space Agency – said the government is still discussing its options with industry, and that they have not decided on a Gateway yet. However, Bains said he is committed to finding spots for our astronauts to fly on future missions, spots they traditionally obtained through Canada’s robotic contributions to NASA’s programs.

“We have a very proud history around astronauts and the work that they do, and we look forward to working with NASA to make sure our astronauts will have opportunities going forward,” Bains said in a scrum with reporters following the conference.

As for the space strategy, Bains did not directly respond to questions asking why it wasn’t ready in 2017, as he had initially announced at the 2016 AIAC conference; he simply said that given the last space strategy was released in 1994, his government was working closely with industry to make sure they are getting things right and promised to unveil a new Long Term Space Plan before the end of the administration’s mandate in late 2019.

His government did, however, spend money in the space sector in the last three consecutive budgets, he told reporters; examples include extending International Space Station cooperation to 2024, and investing in satellite and quantum-related technologies.

Bridenstine spoke warmly in his speech about the contributions of Canada’s robotic systems, including Canadarm that assisted with satellite repair and spacewalks during the space shuttle era, and Canadarm2 that assisted with International Space Station construction. Canadarm2 is still used today for spacewalks and snagging some cargo spacecraft arriving at the orbiting complex. (Bridenstine didn’t mention Dextre, which performs remote-control robotic operations on station through ground controllers at the Canadian Space Agency headquarters in Longueuil, Que.)

Canada provided ISS robotic systems in exchange for astronaut and scientific time aboard the ISS, some 2.3 percent as provided for in the latest agreement with NASA. Canada’s contribution will be highlighted in a big way on Dec. 3, when Canadian astronaut David Saint-Jacques is scheduled to launch to the ISS – the first Canadian to do so in six years.

Bridenstine suggested that our country could provide a “Canada Arm 3” on the Gateway, as well as robotics capabilities inside the station. “We’re going to need a lot of help, and we want Canada to be a major player in these activities,” he said.

But to get Canada involved in Gateway will require a commitment on the part of government. Canada’s last long-term space plan was issued nearly 25 years ago. Successive governments have given interim policy documents that provide high-level guidance, but industry has been asking for more. (More information is provided in our ongoing series on long-term space plans, which you can view here.)

This year, the Don’t Let Go Canada industry coalition began a heavy media campaign asking for the Canadian government to issue that long-term space plan. In Ottawa, the seat of government power, most OC Transpo buses are plastered with ads from the coalition, providing the most high-visibility Canadian space industry advertisements to the public in recent memory.

Minister of Transport Marc Garneau – a three-time space shuttle astronaut and past president of the Canadian Space Agency – did not address the long-term space plan in his own speech at AIAC. His discussion instead went over the historical partnerships of the U.S. and Canadian space programs at the dawn of the space age, and pointed to recent Liberal budget investments in the industry.

“I encourage you to keep up the good work, and the government of Canada will be there with you,” Garneau said. He spoke about the vital importance of the aerospace sector to Canada, saying that it generates jobs and exports for industry and that it is recognized worldwide for its reliability and its innovation. He added that with $550 million in government spending since 2016, “Canada is upping its space game” and will continue discussions with industry about this topic. Many within the space community would disagree strongly with the notion that “Canada is upping its space game.”

Bridenstine and Garneau alike outlined the contributions Canada made to recent space missions, such as the APXS (alpha particle X-ray spectrometer) instrument aboard the Curiosity rover that helped find ancient complex organics on Mars, the LIDAR instrument aboard OSIRIS-REx that will assist with the spacecraft’s touch-and-go on astronaut Bennu in 2020, and the sensors aboard the much-delayed James Webb Space Telescope that is slated to launch in 2021.

“The relationship between the U.S. and Canada has been so critical, not just so important, but critical to the capabilities that we have together developed in space,” Bridenstine said.

Indeed, the two countries have been working together since the dawn of the Space Age; a Canadian instrument flew aboard the NASA Transit 2A satellite in 1960, while a NASA rocket launched Canada’s first satellite (Alouette) in 1961. In the decades prior to that, the countries worked together on sounding rocket missions and other scientific ventures to understand the upper atmosphere.

Bains also appeared on stage in a brief afternoon panel discussion with Bridenstine, where the two officials chatted again about joint U.S.-Canada collaborations in past and present years. To delegates, Bain emphasized the Canadian government is investing in the industry, particularly in areas of innovation that have application to Earth activities – such as health.

In his morning speech, Bridenstine briefly sketched out a reusable architecture plan that NASA hopes to build for the Gateway, which will consist of an orbiting module and landers capable of coming to and from the lunar surface. Gateway will be in an orbit allowing for access to the lunar poles, where they may be reserves of ice capable of supporting human life support and rocket fuel.

Bridenstine said the goal is to not only include all ISS partners in the Gateway, but even to expand the partnership to include the numerous emerging space nations that have gained capabilities since the ISS program was first formally proposed in 1984. Additionally, Bridenstine said that despite ongoing global tensions between the U.S. and Russia, he does hope to continue collaboration with Russia’s Roscosmos as its relationship with NASA has remained strong despite the turmoil.

Bridenstine is in Ottawa this week to meet with officials from the Canadian Space Agency; his whistlestops included a dinner last night with Governor General Julie Payette, a two-time astronaut on the shuttle. He said that the United States has a renewed focus on space exploration with the revival of the National Space Council, which is chaired by U.S. vice-president Mike Pence and includes participation from major U.S. departments such as defence, transportation and commerce.

In addition to participating in the Gateway, Bridenstine asked for Canada to help support Trump’s second and third Space Policy Directives, which have to do with the space regulatory environment and with space traffic management. He compared space to Earth’s oceans, in that both are “global commons” that require joint international management to ensure their safety and security.

I really enjoyed dinner with the Governor General of Canada, Julie Payette. @GGJuliePayette is one of eight Canadian astronauts who have lived and worked in space. We discussed how Canada and the U.S. can grow our partnership in space exploration. pic.twitter.com/0mozgM8e8y

Is SpaceQ's Associate Editor as well as a business and science reporter, researcher and consultant. She recently received her Ph.D. from the University of North Dakota and is communications Instructor instructor at Algonquin College.
Previous Aerospace Companies Need Government Support To Stay Competitive: AIAC Panelists
Next Startup Astroscale is Building a Business Aimed at Cleaning up Space Debris 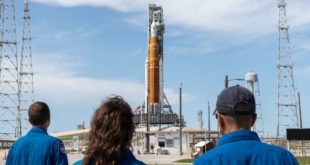 Canada is Counting on Artemis 1 to Fly Well, Just Like Everyone Else