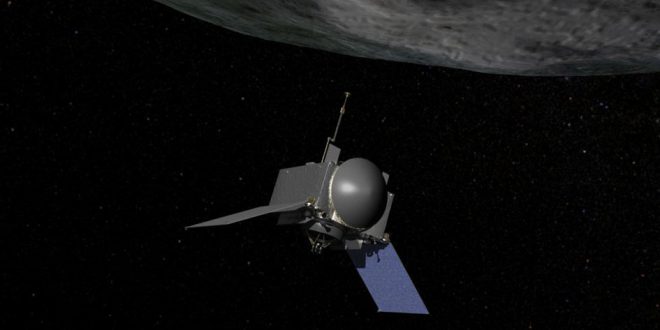 This is an artist's concept of NASA's OSIRIS-REx spacecraft preparing to take a sample from asteroid Bennu. Image Credit: NASA/Goddard/Chris Meaney.

Today at press conference at the Royal Ontario Museum Treasury Board President Tony Clement announced that MacDonald, Dettwiler and Associates Ltd. (MDA) will begin building the OSIRIS-REx Laser Altimeter (OLA) for the 2016 mission.

The Canadian LIDAR is one of four primary instruments on the spacecraft and has the critical function of scanning the asteroid to create a dataset similar to 3D map that will assist in navigating the spacecraft towards the asteroid and will also assist when it prepares to land.

“Our government is proud to support Canada’s space sector through a partnership with NASA on this ambitious mission to return a piece of an asteroid to Earth. Canada is a world leader in optics and this mission will challenge our domestic space industry to, once again, push Canada’s world-renowned expertise to new frontiers,” said Tony Clement, President of the Treasury Board.

The OSIRIS-REx spacecraft will launch in 2016 and will take four years to reach its destination, the near Earth asteroid designated 1999 RQ36 or Bennu.

The asteroid was named Bennu by Michael Puzio, a third-grader from North Carolina who entered a “Name that Asteroid!” contest organized by NASA. The name refers to the Egyptian mythological bird Bennu, which Puzio thought the spacecraft, OSIRIS-REx, resembled.

You can have your name on the spacecraft as all the names of people who request it will be etched on a microchip aboard the spacecraft that will travel to Bennu.
Once it reaches the asteroid it will spend six months mapping the surface. The science team will then pick a location to land so that its robotic arm can scoop up some of its soil for return to Earth. It will return to Earth in 2023 landing in Utah.

In exchange for the OLA instrument, the Canadian Space Agency (CSA) will own 4% of the total returned sample which will provided to the Canadian scientific community with its first-ever direct access to a returned asteroid sample.

MDA received awarded an initial contract in February of 2013 to design the instrument for which it was to receive $15.8 million. The value of today’s follow on contract is $8.84 million.
The governments total investment in OSIRIS-REx for the full life cycle of the mission is $61 million over 15 years to support the development of OLA and the science team.

Perhaps unintentionally a Canadian Space Agency representative Tweeted the following tweet during today’s event which made it seem like today’s announcement was a for a new mission. The news about this mission and Canada’s contribution was already announced three years ago.

However the press released issued by the government started with this sentence “Today, on behalf of Industry Minister James Moore, Treasury Board President Tony Clement announced a significant contribution to Canadian space innovation. In partnership with MacDonald, Dettwiler and Associates Ltd. (MDA) and the National Aeronautics and Space Administration (NASA), the Canadian Space Agency (CSA) is advancing Canada’s leadership in the niche technologies of Light Detection and Ranging systems (Lidar) through Canada’s first international mission to return a sample from an asteroid to Earth.”

In fact if you didn’t know the history of this mission you might think the government was actually announcing a new mission. Or perhaps it was just poor wording by the Conservative governments public relations department. Regardless, it certainly seems like the Twitterverse bought this as a new mission including a CSA employee.

Boucher is an entrepreneur, writer, editor & publisher. He is the founder of SpaceQ Media Inc. and CEO and co-founder of SpaceRef Interactive LLC. Boucher has 20 years working in various roles in the space industry and a total of 30 years as a technology entrepreneur including creating Maple Square, Canada's first internet directory and search engine.
@marckboucher
Previous Satellite sees Smoke from Canadian Fires over U.S.
Next Is the Universe a Bubble?