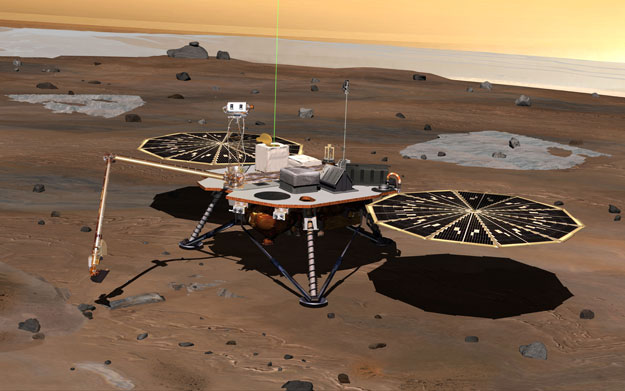 Laser technology has the image of being as futuristic as space travel itself, but lasers are being used for many purposes beyond their science fiction role as a weapon. And Canadian industry is taking a leading role in developing lasers for space applications.

Canadian firms are world leaders in applying LIDAR (for light detection and ranging) technology in space, including inspecting tiles on the Space Shuttle during flight and looking for clouds and precipitation on Mars.

LIDAR is already finding many applications close to Earth, including surveying and mapping, measuring biomass for forestry and agriculture, detecting topographic features for use by geologists and archeologists, and other remote sensing uses for industry, the military and even law enforcement.

LIDAR’s most important use in the future may lie in assisting spacecraft with rendezvous and docking operations in space, but future business prospects for Canadian contractors remain unclear as space agencies cope with tough economic and political conditions, and as the private sector carves out a larger role in spaceflight.

The Canadian government began supporting the development of LIDAR, which bounces light, usually laser beams, off of other object much like radar does with radio waves, in the 1970s and 1980s before the Canadian Space Agency opened its doors in 1989.

One of Canada’s best known LIDAR contractors, the Toronto-based Optech, was set up in 1974 to market LIDAR technology, which is widely used on Earth for mapping, range finding, and hydrography.

The Canadian weather sensing system for Mars Phoenix, which landed near the north polar cap of Mars on May 25, 2008, included a LIDAR instrument built by Optech and MacDonald Dettwiler and Associates (MDA). The LIDAR instrument on Mars Phoenix surprised scientists when it detected snow falling from clouds, showing that ice clouds and precipitation on the red planet were more Earth-like than anticipated.

The LIDAR instrument for Phoenix worked by detecting various forms of scattering of the upward-pointing laser pulse sent from the instrument. The delay of the light scattered by particles in the Martian atmosphere was used to determine the altitude of the particles, and the wavelength of the scattered light gave clues to the nature of the particles.

The OSIRIS-REx spacecraft that will be launched in 2016 to asteroid 1999 RQ36 will fly close to it and obtain a sample and includes a Canadian LIDAR instrument built by MDA and Optech. The data obtained by the OSIRIS-REx Laser Altimeter (OLA) will also be used by scientists to map the asteroid and decide where to obtain the sample from the asteroid.

Neptec Design Group, based in Ottawa, brought laser technology to the Space Shuttle in 2001 the form of its Laser Camera System that added a 3D laser scanning capability to the space vision system that Canada has been supporting for many years to help build the International Space Station. Between the loss of the shuttle Columbia in 2003 and the end of the shuttle program, NASA used the Neptec system to inspect tiles on the bottom of shuttles on orbit to ensure that they were safe for re-entry.

Although at one time four-fifths of Neptec’s revenues came from the shuttle program, the company has successfully adapted to life without the shuttle by finding new work.

“For more than two decades, CSA has been funding incremental developments in space-based LIDAR, which has led to several successful applications, most notably the Laser Camera System for on-orbit inspection of the thermal tiles on the Space Shuttle, a LIDAR for the Canadian Meteorological station on the Phoenix Mars Lander, and three successful TriDAR missions on the Space Shuttle to demonstrate rendezvous and docking with the ISS,” CSA Manager (Robotics) Eric Martin told Space Quarterly.

“Space-based LIDAR is a signature Canadian technology, and Canada is branded as a world leader,” Martin said. The next planned step is to demonstrate LIDAR applications on the ISS that will necessitate further innovation combining a wider field of view, long range tracking, and close up inspection, he added.

Because of ongoing economic problems faced in recent years by governments and corporations around the world, and the impasse between the Obama Administration and the U.S. Congress over the future direction of NASA, the prospects for new technologies such as LIDAR are unclear.

“The space market is still a place where there is a lot of discussion about a lot of things in a lot of places,” said Iain Christie, CEO of the Neptec Design Group, told Space Quarterly in an interview. “Everybody’s trying to keep as many options open as possible.”

Both Optech and Neptec have developed LIDAR systems for use in space rendezvous operations, and Martin said both companies are in the running to develop the LIDAR system on the ISS.

In partnership with MDA, Optech supplied a Rendezvous LIDAR System for the U.S. Air Force’s XSS-11 (for eXperimental Satellite System), which was launched on April 11, 2005 atop a Minotaur rocket. The spacecraft tested military applications, including in-space inspection, servicing and repair of satellites. The RLS operated “flawlessly” during the XSS-11 mission, according to Optech, providing live updates during rendezvous operations.

Neptec built an advanced version of its Laser Camera System that was enhanced with a range-extending LIDAR on its triangulation sensor, creating the Triangulation and LIDAR Automated Rendezvous and Docking system or TriDAR. This system was first tested on the STS-128, STS-131 and STS-135 missions in the final two years of the shuttle program to track the ISS during docking, undocking and fly-around operations.

Christie is optimistic about the future for TriDAR because it does not require the use of special targets on spacecraft, which means that users don’t need to worry about building and maintaining targets. TriDAR equipped vehicles can also rendezvous with non-cooperative spacecraft. “TriDAR just truly uses the shape of the target,” he said.

Neptec will be supplying the TriDAR system for Orbital Sciences Corporation’s Cygnus spacecraft, which is being developed to deliver cargo to the ISS starting next year under NASA’s Commercial Orbital Transportation Services program. “We hope to see TriDAR back at the space station in the next year,” Christie said.

The Defense Advanced Research Projects Agency (DARPA) in the United States is undertaking the Phoenix program to develop and demonstrate technologies to remove and then re-use components and systems from retired communications and other satellites in graveyard orbits near geosynchronous orbit. Christie said this program offers opportunities for developers of space vision systems like Neptec.

There are also possibilities for contracts involving TriDAR with the European Space Agency, including ESA’s projected robotic lunar lander, Christie explained. At present, ESA programs are undergoing a review due to Europe’s economic problems. Neptec is also building a laser sensor for the Japanese Astro-H X-ray astronomy satellite with support from the CSA.

Canadian companies such as Neptec are also working on rovers for use on the Moon and elsewhere, and Christie said these vehicles will require vision systems for navigation.

MDA for its part has long been interested in developing robot spacecraft to rendezvous with and service other spacecraft. Starting in 2004, MDA worked to get support from NASA and American contractors to build a spacecraft using Canadarm robotic technology to service the Hubble Space Telescope, but the idea was ultimately set aside.

More recently in 2011, MDA and communications satellite provider Intelsat announced that they were considering working together on satellite refueling and servicing on orbit. But the two firms announced in January that the deal would not proceed because of a lack of interest on the part of the U.S. government and other potential customers.

Given MDA’s work with Optech on the XSS-11 program, it is possible that LIDAR could have been part of these proposals and in future proposals of this type that MDA will likely put forward to advance robotic technologies such as the Next-Generation Canadarm. When contacted on the possibility of using LIDAR in these proposals, an MDA official declined to speculate.

Once direction is established for NASA and the space industry emerges from today’s economic problems, new opportunities should open up for Canadian suppliers of LIDAR technology. The growing use of lasers and LIDAR for a variety of applications both on Earth and in space will guarantee that these Canadian firms will face greater competition from firms such as Lockheed Martin and Boeing in the United States and Astrium in Europe.

The article was from Space Quarterly magazine, a publication of SpaceRef which is no longer publishing. Back issues of the magazine are still available for purchase.

Contributed by: Chris Gainor Is a Ph.D. historian and author specializing in space flight and aeronautics. He has written four books, including Arrows, to the Moon, Avro’s Engineers and the Space Race, and To a Distant Sun: The Rocket Pioneers, and numerous articles in journals, newspapers and magazines.

Boucher is an entrepreneur, writer, editor & publisher. He is the founder of SpaceQ Media Inc. and CEO and co-founder of SpaceRef Interactive LLC. Boucher has 20+ years working in various roles in the space industry and a total of 30 years as a technology entrepreneur including creating Maple Square, Canada's first internet directory and search engine.
@marckboucher
Previous Space Quarterly Magazine December Issue Available
Next Future of Exploration Exhibition at the Ontario Science Centre