NASA and industry engineers lit up the Utah sky Thursday with the initial full-scale, full-duration test firing of the first stage motor for the Ares I rocket. The Ares I is a crew launch vehicle in development for NASA’s Constellation Program.

ATK Space Systems conducted the successful stationary firing of the five-segment solid development motor 1, or DM-1. ATK Space Systems, a division of Alliant Techsystems of Brigham City, Utah, is the prime contractor for the Ares I first stage. Engineers will use the measurements gathered from the test to evaluate thrust, roll control, acoustics and motor vibrations. This data will provide valuable information as NASA develops the Ares I and Ares V vehicles. Another ground test is planned for summer 2010.

“With this test, we have taken lessons learned from many years of experience in solid rocket motor development and have built on that foundation,” said Alex Priskos, first stage manager for Ares Projects at NASA’s Marshall Space Flight Center in Huntsville, Ala. “Our team collected data from 650 sensors today to evaluate the motor’s performance. This test and those that follow are essential to understanding as many aspects of our motor as possible, including strengths and weaknesses, and ultimately delivering the safest and most reliable motor possible.”

This was the second attempt to conduct the two-minute rocket test at ATK’s test stand in Promontory, Utah. The first test on Aug. 27 was canceled with 20 seconds left in the countdown because of a problem with a component of the ground controller unit, which sends power to the system that moves the nozzle during the test. Through a detailed investigation, the engineering team pinpointed the problem and replaced the faulty part.

The first stage motor will generate up to 3.6 million pounds of thrust, or lifting power, at launch. Although similar to the solid rocket boosters that help power the space shuttle to orbit, the Ares development motor includes several upgrades and technology improvements implemented by NASA and ATK engineers.

Motor upgrades from a shuttle booster include the addition of a fifth segment, a larger nozzle throat, and upgraded insulation and liner. The forward motor segment also has been improved for performance by adding another fin, or slot in the propellant. This change in the geometry of the propellant provides additional surface area for burning the solid fuel, which results in greater thrust.

The DM-1 nozzle throat is three inches wider in diameter than the nozzle used for the shuttle. The bigger nozzle throat allows the motor to handle the additional thrust from the five-segment booster. It also meets NASA’s structural requirements to stay within the pressure capacity of the existing steel cases — the large, barrel-shaped cylinders that house the fuel — ensuring safety and reliability. Upgrades also were made to the insulation and liner that protect the first stage’s steel cases.

The motor cases are flight proven hardware used on shuttle launches for more than three decades. The cases used in this ground test have collectively flown on 48 previous missions, including STS-1, the first shuttle flight.

Marshall manages the Ares Projects and is responsible for design and development of the Ares I rocket and Ares V heavy cargo launch vehicle. NASA’s Johnson Space Center in Houston manages the Constellation Program, which includes the Ares I, Ares V, Orion crew module and Altair lunar lander. The program also includes multiple project teams at NASA centers and contract organizations around the United States.

For more information about the Ares rockets, visit: http://www.nasa.gov/ares

Boucher is an entrepreneur, writer, editor & publisher. He is the founder of SpaceQ Media Inc. and CEO and co-founder of SpaceRef Interactive Inc. Boucher has 20 years working in various roles in the space industry and a total of 28 years as a technology entrepreneur including creating Maple Square, Canada's first internet directory and search engine.
@marckboucher
Previous LOIRP Releases Recovered Lunar Orbiter III Image of Surveyor 1 on the Lunar Surface
Next The Highest GigaPan Panoramas On Earth's Surface 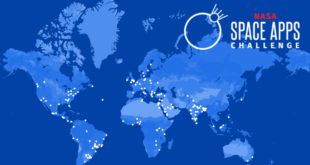