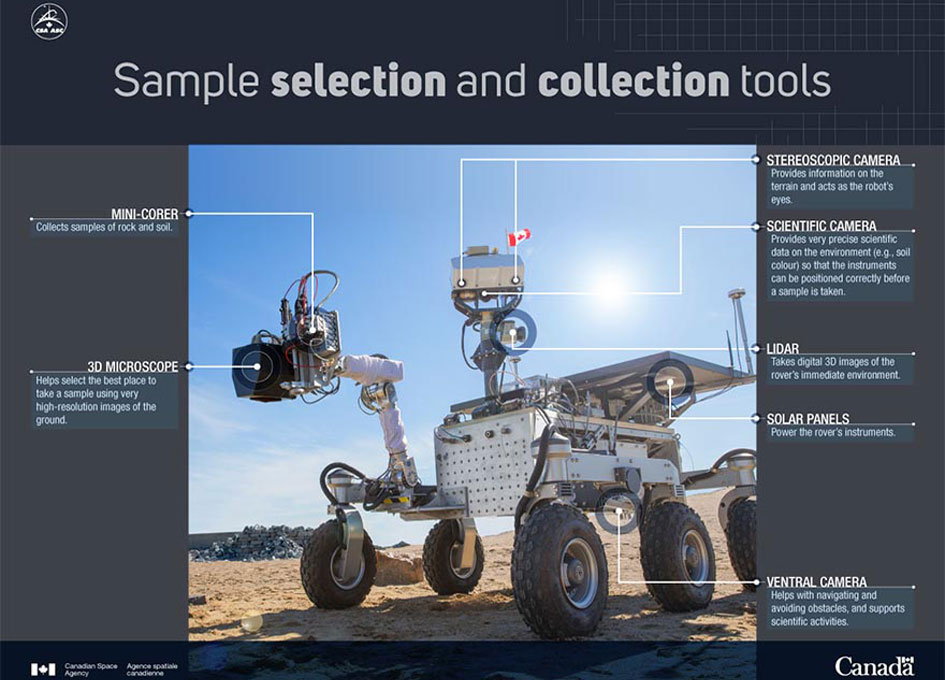 Share
For the fourth consecutive year, a Canadian led Mars Sample Return Simulation will begin today in preparation for a future international Mars sample return mission. The simulation brings together over 50 scientists and engineers from across Canada and international collaborators from the United States, Germany and the United Kingdom.

The simulation team consists of a Science Team, a Field Team and a Rover Operations Team.
For three weeks the teams will focus on a Mars analogue site in Utah where the Canadian Space Agency (CSA) Mars Exploration Science Rover (MESR) will be operating.

Why Do We Need a Mars Sample Return Mission?

The underlying goal of a Mars Sample Return (MSR) mission according to the CSA is to answer the fundamental question of of whether life existed elsewhere in the solar system, including Mars.

The CSA says that “scientists from around the world are currently trying to develop ways to figure that out. On Earth, we know that signs of ancient life can sometimes be found within certain types of rocks, and so one of the best ways to find out if there has ever been life on Mars may be to look inside similar rocks found there.”

“However, the miniaturized instruments used on space missions will always have more limited abilities than sophisticated laboratories on Earth, which is why there is a strong desire to bring samples back to Earth to be analyzed. Before being able to return these samples, though, we first need to test and determine how to best select and collect them.”

The CSA’s reasoning for returning a sample to Earth is consistent with previous reports on a MSR mission.

The U.S. based National Academies Press (NAP) in their 2003 Assessment of Mars Science and Mission Priorities put a MSR mission in this context; “in summary, at the present state of knowledge and technological expertise–and, probably, for the forthcoming several decades–it is unlikely that robotic in situ exploration will prove capable of demonstrating to an acceptable level of certainty whether there once was or is now life on Mars. For the foreseeable future, it is reasonable to expect that such studies can be performed only on samples retrieved from Mars and brought to Earth for detailed investigation in appropriately equipped laboratories.”

A MSR mission is a high priority for the CSA, NASA and the European Space Agency and is considered a critical pre-cursor mission before a human mission to Mars can take place. Other than answering the fundamental question of whether there is life in the solar system, scientists also have a practical need to know what, if any biological life, might be on Mars so that astronauts don’t bring home anything that could contaminate the Earth.
The exact date of such a mission is still to be determined, but in recent years it’s become clear that such a mission should be an international collaboration.

Whether that’s realistic or not, it is putting pressure on NASA to embark on a MSR mission.

At this time no dedicated Mars Sample Return mission has been scheduled or funded though different space agencies are looking at either 2022 or 2024 as possible mission dates. NASA plans to send another rover to Mars in 2020 that will be able to collect samples which could be retrieved by a future Mars mission.

The MSR simulation which starts today has the following goals; To learn to identify the best samples, to retrieve and transfer them, and to validate that the best samples were collected.

How will this be accomplished? From October 31 to November 10 the science team will “develop a science plan to identify and characterize rocks that may contain signs of life. Selected samples (“cores”) will then be collected using a drilling tool” according to the CSA.

Dr. Osinki said of the importance of the MSR simulation, “a Mars Sample Return mission is seen as the next big step in the exploration of our solar system. But nobody has done this yet so we need to prepare and train the next generation of scientists and engineers who will actually participate in this mission.”

And when asked by email what the value to the students in participating in this simulation is he said “participating in a mission simulation like this is the next best thing to an actual space mission. This is one of the most realistic mission simulations to date, with a prototype rover built by MDA, a series of instruments that mimic what NASA’s Mars 2020 rover will carry, and a mission control structure that mirrors what the Curiosity rover team use.”

A Sneak Peek of the 2016 Mars Sample Return Simulation, CSA

After the Sample Selection and Collection phase the science team will begin the Sample Retrieval and Transfer and Scientific Validation of Samples phases which takes place between November 11 to 18.

For the international space science community it’s not matter of if a Mars Sample Return mission happens, it’s when. For Canada and the scientific community, this simulation is an opportunity to develop skills needed to prepare for that mission so that Canada can have a meaningful role in such a critical mission, a pre-cursor to sending humans to the Red planet.

Boucher is an entrepreneur, writer, editor & publisher. He is the founder of SpaceQ Media Inc. and CEO and co-founder of SpaceRef Interactive LLC. Boucher has 20+ years working in various roles in the space industry and a total of 30 years as a technology entrepreneur including creating Maple Square, Canada's first internet directory and search engine.
@marckboucher
Previous Second Liberal Budget Should Define Their Commitment to Canada's Space Program
Next Short Cuts: COM DEV Wins CSA Optics Contracts, STEM Program and a Full Calendar