At a nondescript building at Western University in London, Ontario in a makeshift “mission control”, a team of scientists and engineers are currently planning and then carrying out an analog Mars Sample Return mission. This isn’t just a computer simulation exercise, they’re using a real rover with actual instrumentation located at the Canadian Space Agency’s Mars Yard. 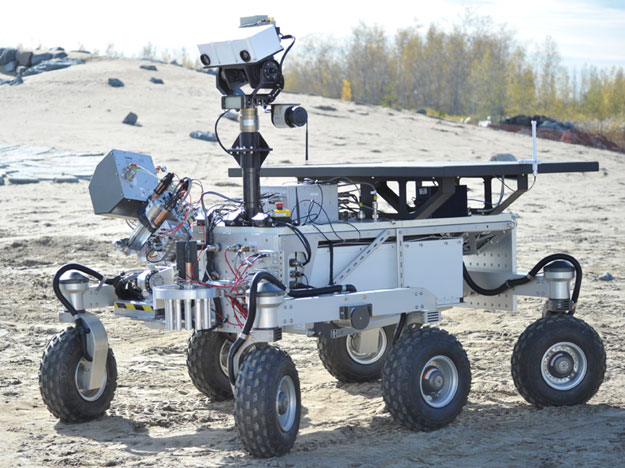 Mars Exploration Science Rover (MESR). Credit: Canadian Space Agency.
The Technologies and Techniques for Earth and Space Exploration program, a six year grant, is part of the Natural Sciences and Engineering Research Council of Canada’s (NSERC) Collaborative Research and Training Experience Program (CREATE).
This is the second year of the program and builds on the smaller mission which took place last summer.
The program is led by Western’s Centre for Planetary Science and Exploration Associate Director Dr. Gordon Osinski as the Principal Investigator with Co-Investigators from the University of Toronto, York University, Queen’s University, Memorial University and the University of British Columbia.
The program is not limited to students and their professors. It also brings together professionals from the Canadian Space Agency (CSA), NASA and industry, including MacDonald, Dettwiler and Associates Ltd. (MDA), CLEARPATH Robotics, Optech, Barrick, and Gedex in a collaborative program that is building mission operation capability.
The program goes beyond what is normally available in a traditional university course of study. According to Dr. Osinski they’re “trying to achieve two things”, bringing “scientists and engineers” together to work through mission planning and operations and “bridging Earth and space” by including traditional space companies like MDA with terrestrial mining companies like Barrick. 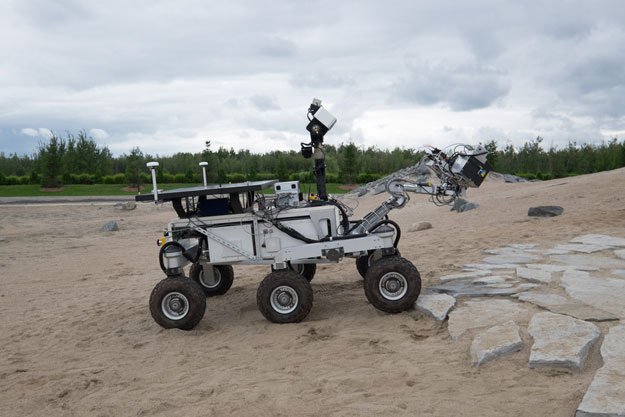 Side view of the MESR rover in the CSA Mars Yard. Credit: Western University/CSA.
The training and experience gained through the program will also provide the students with greater opportunity to work on actual international planetary missions.
The longer term goal is to build Canadian expertise in mission planning and operations for the day when Canada will lead its own robotic planetary mission.
At Western, students are led by postdoctoral researchers Alex Pontefract and Raymond Francis who serve as the mission science and planning managers.
Francis brings real world experience to the program as he currently is a Science Team Collaborator for the ongoing NASA Mars Science Laboratory (MSL) mission (Curiosity Rover). He’s also involved on the operations side of the MLS mission as a Science Theme Lead selecting, planning and scheduling science activities related to environmental and atmospheric studies to produce a plan of observations and experiments.

Panorama of the Canadian Space Agency Mars yard taken from the Mars Exploration Science Rover. Credit: Canadian Space Agency. [Larger Version]
A team of five students are also stationed at CSA headquarters in Saint-Hubert, Québec, home of the Mars Yard.
While mission planning and operations take place in London, the team in Saint-Hubert, with support from the Canadian Space Agency, are commanding the Mars Exploration Science Rover (MESR) built by MDA.
The rover is a product of the $110 million stimulus funds injected into the space program in 2009 by the government to help prop up the sector as Canada and the World went through difficult economics times.
The MESR is a terrestrial science rover specifically built for operation on Earth as an analog to a potential future moon or Mars rover. Its instrumentation this year includes a robotic arm, or as it’s called, a Small Manipulator Arm (SMA) that is used to position a microscope (TEMMI) and mini-corer to drill into rocks. An issue however with the SMA has prevented them from using the mini-corer as planned. They are currently drilling by hand. 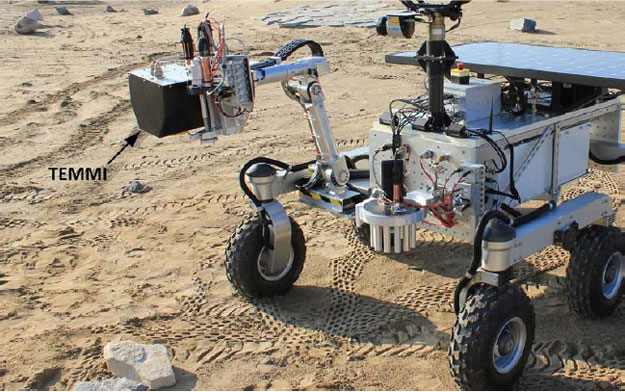 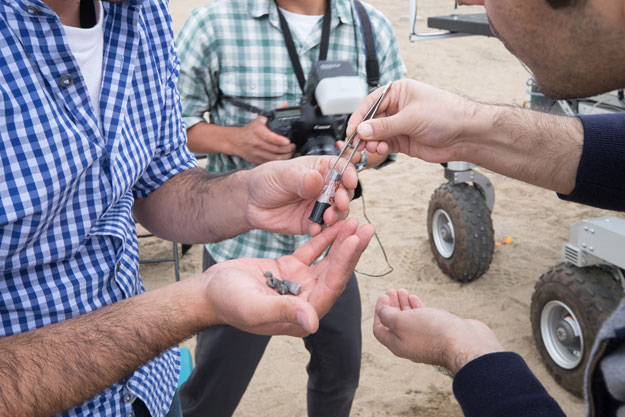 Placing the drill core pieces into a sample container. Credit: Western University/CSA.
The engineering team is controlling the rover using a CSA developed ground control software package called Symphony. According to the CSA the Symphony software “focuses on providing an integrated mission planning, commanding and monitoring architecture for planetary exploration.” And in context of this mission it is collecting “the instrument telemetry and science data and provides a basic Geographic Information System (GIS) used to maintain spatial and temporal context information” which the team then uses in its planning sessions.
The Mars Yard was seeded with interesting rock samples which the science and engineering team need to find. No one on the science and engineering team were made aware of where the samples were placed. It’s up to them to discover their location, command the rover over to a sample, and analyze the samples.
Since the mission is an analog of a future Mars Sample Return mission, the samples found will be collected and distributed to participating university labs to be analyzed further during the school year after which the team will be informed on how well they did in finding and selecting samples.
Some of the type of rocks the team are looking for include hydrothermally altered samples which is a prime objective of a Mars Sample Return mission according to Dr. Osinski. 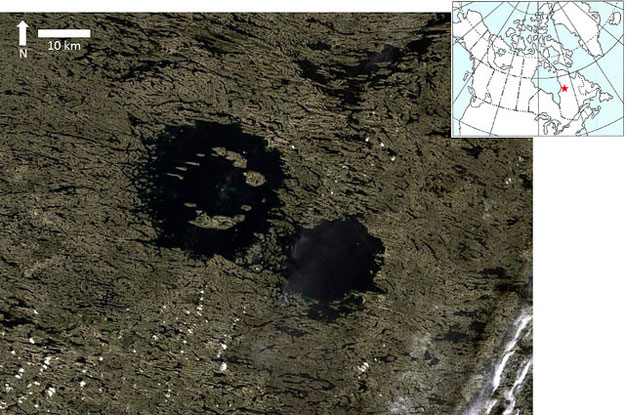 Aerial view of the Clearwater lakes created by meteorite impacts. The geology expedition will be visiting the Western lake (left). Credit: Canadian Space Agency.
While the teams in London and Saint-Hubert are working on this years objective another team is already on their way to a potential analog site for next years mission.
In northwestern Québec at Clearwater lakes are two impact craters. A geology team will be on location this week at these seldom explored impact craters. In particular, the western lake is of interest to the team. Should the impact crater prove suitable it could be the site of next years mission.
The day is coming where Canada will lead a robotic planetary mission. We’re not there yet, but through programs like these we’re one step closer.
The ongoing mission lasts through August 25 and you can follow along on Twitter using the hashtag #CSAMars. 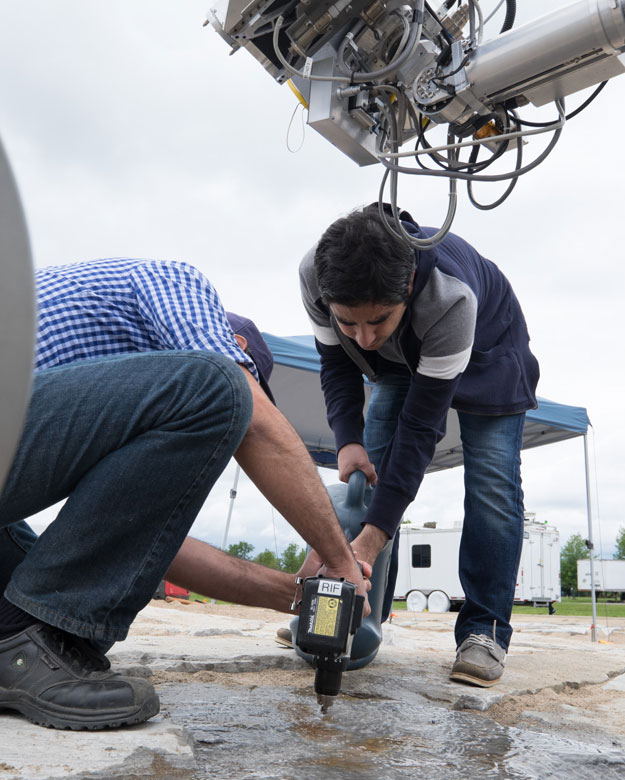 Drilling a core sample at one of the science team’s desired targets. A handheld drill was used in this case rather than the mini-corer on the MESR rover arm in an attempt to complete the coring faster, as poor weather was predicted that could scrap operations that afternoon. Credit: Western University/CSA. 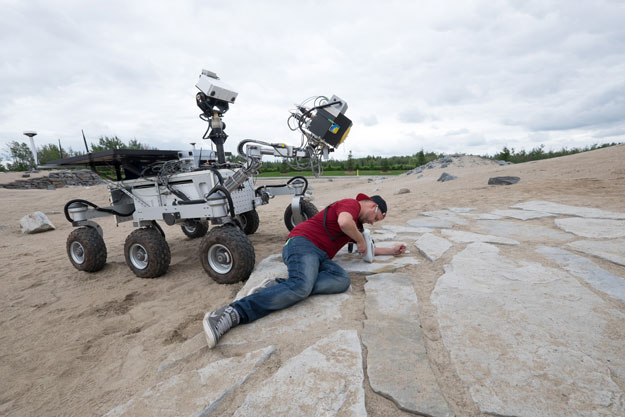 Boucher is an entrepreneur, writer, editor & publisher. He is the founder of SpaceQ Media Inc. and CEO and co-founder of SpaceRef Interactive LLC. Boucher has 20+ years working in various roles in the space industry and a total of 30 years as a technology entrepreneur including creating Maple Square, Canada's first internet directory and search engine.
@marckboucher
Previous Canadian Nanosats CanX-4 and CanX-5 Achieve Notable Firsts
Next Open Space Orbital Crowdfunded Campaign Falls Short