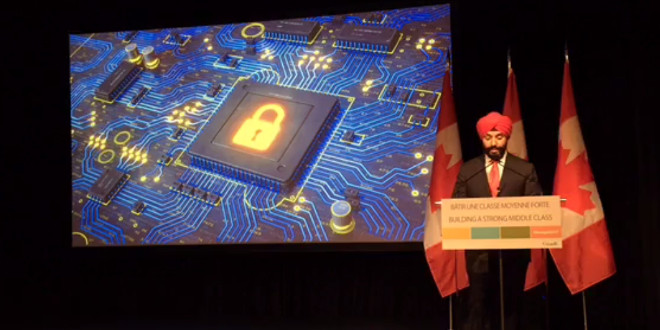 The Canadian Space Agency (CSA) this week released a Request for Information (RFI) for the proposed Quantum Encryption and Science Satellite (QEYSSat) mission.

When the federal budget was rolled out in late March it included a rarely seen shout-out to space exploration including innovating in the area of quantum technology. Then in late April, Minister Bains and Minister Garneau held a press conference at CSA headquarters where it was announced that the Institute for Quantum Computing at the University of Waterloo would be involved.

This came as no surprise as the QEYSSat mission was proposed by Thomas Jennewein of the Institute for Quantum Computing several years ago.

What this RFI does is allow the participants to prepare for a fall Request for Proposals thereby streamlining that process allowing for the project to move forward in a timely fashion. It will also allow the CSA to better budget for the mission with preliminary costs estimates.

It is expected that the Space Flight Laboratory (SFL) at the University of Toronto Institute for Aerospace Studies (UTIAS) will provide the NEMO-150 platform for the QEYSSat microsatellite.

The RFI also encourages ideas be suggested for secondary payloads.

The RFI states that since this mission is for a microsatellite it will not be a primary payload on launch vehicle. It is suggested that options for rideshare include on a SpaceX Falcon 9 or Indian PSLV. Unfortunately this could mean a longer wait for a flight to orbit as rideshares usually take secondary consideration when launch providers plan their schedules.

According to the RFI the “objective of the proposed mission is to create a quantum link between ground and space using polarized photons and to establish encryption for ground based users using this link.”

The Request for Information

Boucher is an entrepreneur, writer, editor & publisher. He is the founder of SpaceQ Media Inc. and CEO and co-founder of SpaceRef Interactive LLC. Boucher has 20+ years working in various roles in the space industry and a total of 30 years as a technology entrepreneur including creating Maple Square, Canada's first internet directory and search engine.
@marckboucher
Previous Mission Approved – Bob Richards on the Moon Express Plan to Commercialize the Moon
Next ESA Releases Banff Swarm and Cryosat Conference Wrap-up Video