An illustration of a particle collision at CERN’s Large Hadron Collider. Credit: “Phantom of the Universe".
Share

While some celebrated Halloween last night, other people were celebrating the first Dark Matter Day. Yes, Dark Matter has its own day, though it’s unofficial, but is global.

What is Dark Matter?

As scientists learned more about our universe it became clear that something was missing. According to Interactions Collaboration “less than 5 percent of the total mass and energy in the universe is the stuff we know about: like stars, planets, galaxies, and gases.”

And “dark matter, which we have so far only detected through its gravity-based effects in space, makes up about 85 percent of the total mass of the universe. So there’s a BIG part of the universe that we don’t know much about. We’re not sure if dark matter is made up of undiscovered particles, or if it can be explained by tweaking the known laws of physics. Solving the mystery of dark matter is considered one of the most pressing pursuits in particle physics and could teach us much about the history and structure of our universe.”

To encourage awareness and to help solve the mysteries of dark matter the Interactions Collaboration organization created Dark Matter Day. “The search for dark matter at the furthest reaches of the universe, and also at scales smaller than atoms, is one of the hottest pursuits in physics today, and whatever we learn about dark matter will be a discovery for the ages.”

Events were organized globally including in Canada. One of those events was a live webinar by the SNOLAB in Sudbury. Below you can watch the presention and learn more about dark matter.

To coincide with the first Dark Matter Day, a new planetarium show was produced called Phantom of the Universe, the Hunt for Dark Matter.

It was Michael Barnett, a physicist at the Department of Energy’s Lawrence Berkeley National Laboratory, who had the idea to create the new show.

In a press release Barnett said “I wanted to convey the excitement of what’s going on in research to show how many things we’ve learned about dark matter, how we know it’s really there, and to show how we’re trying to figure out what it is.”

“Joao Pequenao of CERN’s Media Lab, a former research specialist at Berkeley Lab, directed the production. It features narration by Academy Award-winning actress Tilda Swinton and sound effects by Skywalker Sound, the studio responsible for the hum of lightsabers and whine of spaceships in the ‘Star Wars’ films. Carey Ann Strelecki, who served as senior research consultant on the Academy Award-winning documentary film ‘An Inconvenient Truth,’ handled the writing and production work.”

The 25-minute  planetarium show is now playing globally, including in Vancouver at the HR MacMillan Space Centre.

Boucher is an entrepreneur, writer, editor & publisher. He is the founder of SpaceQ Media Inc. and CEO and co-founder of SpaceRef Interactive Inc. Boucher has 20 years working in various roles in the space industry and a total of 28 years as a technology entrepreneur including creating Maple Square, Canada's first internet directory and search engine.
@marckboucher
Previous Blade Runner 2049 Demonstrates Canada’s Collaborative Edge
Next Toronto’s Space Flight Laboratory is a Pioneer in the Evolution of Small Satellites 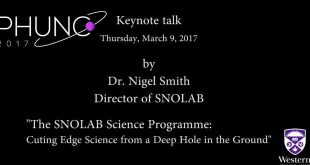 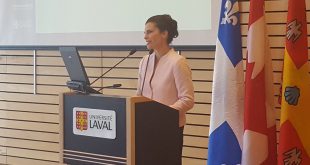