Telesat saw its Nimiq 5 satellite launched today from pad 39 at the Baikonur Cosmodrome in Kazakhstan aboard a Russian Proton Breeze M rocket. Nimiq 5 is a commercial communications satellite built by Space Systems/Loral for Telesat. Nimiq 5 will utilize 32 high-powered Ku-band transponders to deliver high definition and direct-to-home television services for EchoStar and the Dish Network in the United States.

The Proton Breeze M launched at 12:19 PDT; 15:19 EDT and after a 9 hour 15 minute mission, the Breeze M successfully released the Nimiq 5 satellite, weighing almost 5 tons, into geostationary transfer orbit. This was the 348th launch for the Proton.
Telesat’s 19th satellite will occupy an orbital position at 72.7 degrees west longitude and is expected to have a lifespan of more than 15 years.
Bell TV was to have had 50% of the capacity of Nimiq 5 but Telesat announced today EchoStar would be making full use of the satellite.

Boucher is an entrepreneur, writer, editor & publisher. He is the founder of SpaceQ Media Inc. and CEO and co-founder of SpaceRef Interactive Inc. Boucher has 20 years working in various roles in the space industry and a total of 28 years as a technology entrepreneur including creating Maple Square, Canada's first internet directory and search engine.
@marckboucher
Previous Canadarm2 Successfully Captures Japanese H-II Transfer Vehicle
Next MODIS Image of West Central Canada 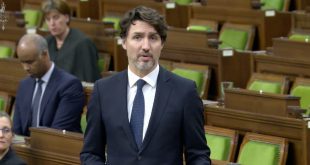