SpaceX Falcon 9 Makes it to Orbit on First Attempt

Earlier in the day it seemed like SpaceX would have to wait another day to launch. First there were boats in the range and the safety officers would not let them launch until they had cleared, then came the launch abort with 2 seconds to go before launch. But SpaceX tried again, and at 2:45 eastern the Falcon 9 soared to lofty heights on its maiden voyage.

After the initial launch abort at 11:30 a.m. it seemed SpaceX might have to scrub for the day and try again tomorrow. But one of the innovations of their rocket is ability to recycle the rocket so it’s ready for launch within an hour of an abort if need be. So it was just before window to launch was to close for the day that they tried again. And this time it was a beautiful sight to see. It is rare that rocket on its maiden launch succeeds and even rarer when the precursor medium lift rocket for future a heavy lift launcher succeeds.
SpaceX is only the second US company to design and build an engine for heavy lift rockets from scratch in 20 years. The last new heavy lift engine developed was the Pratt & Whitney Rocketdyne RS-68 developed in the 90’s for the Delta IV.
Of note, because of innovations in design and manufacturing SpaceX can offer a heavy lift launch capability at a significant cost reduction compared to its competitors. Launching anything into space is prohibitively expense. With today’s success SpaceX has given notice to its competitors that times are changing and access to space just got cheaper.

Boucher is an entrepreneur, writer, editor & publisher. He is the founder of SpaceQ Media Inc. and CEO and co-founder of SpaceRef Interactive Inc. Boucher has 20 years working in various roles in the space industry and a total of 28 years as a technology entrepreneur including creating Maple Square, Canada's first internet directory and search engine.
@marckboucher
Previous Canadian Space Society Lecture – June 2nd
Next Astronaut Chris Hadfield Interviewed on his NEEMO Experience 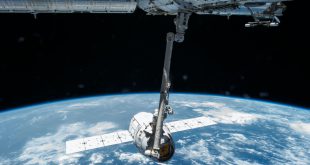 OneWeb Closer to Delivering LEO SatCom to the Canadian Arctic