Scientists Mostly Free to Talk to the Media Under New Policy

The Trudeau government, acting after media reports of “scientist muzzling” under the predecessor Harper administration, released the policy last month in an effort to promote transparency, according to a statement on Canada.ca. The new policy, in part, outlines how scientists speak with the media. (You can read the entire policy here.)

“Of utmost concern is protecting the integrity of researchers and reaffirming to Canadians the important role that researchers play in our society. In addition, the Chief Science Advisor is responsible for encouraging researchers to speak freely about their work and ensuring that this freedom is shielded from political, commercial or stakeholder interference,” read the joint statement from Scott Brison, president of the Treasury Board, and Kirsty Duncan, the minister of science and sport.

However, media relations teams at both the Canadian Space Agency (CSA) and the National Research Council (NRC) – two government organizations with large space research portfolios – told SpaceQ that the policy isn’t expected to change their approach to dealing with the media. NRC and CSA representatives said that scientists are free to speak with media, although media relations generally listens in to interviews in case of follow-up questions.

The new policy “doesn’t represent a change, but more an affirmation” of what the CSA already does, said Isabelle Tremblay, director of astronauts, life sciences and space medicine. She said the values of free speech and speaking about research publicly are fundamental things that are already part of CSA’s culture, and added the agency had no issues with government muzzling in past years.

SpaceQ though was having trouble getting scientists to talk on the record during the Conservative government period and wrote an op-ed in 2010 decrying the government’s reluctance to allow scientists to speak freely.

All government departments with more than 10 scientists collaborated on the new policy, which will be implemented Dec. 31, Tremblay said. In CSA’s case, they asked their scientists for input through the scientists’ union, the Professional Institute of the Public Service of Canada (PIPSC). The CSA and other departments submitted their feedback on the policy to the Chief Science Advisor, which means the new policy is a consensus agreement between the departments, Tremblay added.

At the NRC, media relations representatives there said they emphasize proactive media work with journalists. This includes reaching out to journalists individually when interesting research is published, and promoting research through social media platforms to reach a more diverse audience.

“It doesn’t change my media relations approach,” added Lucie Vignola, NRC’s director general of communications, of the new policy. “Within the NRC, we are open for business. We want people to know who our people are, what we’re doing, and one really good way of doing that is the media relations activities we do.”

NRC came under some criticism in 2012, however, in the wake of stories in the Ottawa Citizen concerning snow research. NRC was a team member on the Global Precipitation Measurement Cold Season Precipitation Experiment (GCPEx), an experiment that was measuring falling snow in southern Ontario to test the accuracy of newer equipment. (Traditional radar of the time had difficulty measuring the quantity of snowfall.)

According to Citizen reporter Tom Spears in an April 2012 story, his query about NRC’s participation generated dozens of e-mails in the department before he received a short written response. NASA, another participant in the project, reportedly agreed to a 15-minute phone interview quickly.

This unique situation was often cited by others as a case of government muzzling, Wolde recalled in a SpaceQ interview set up through NRC media relations, but he said the situation was more subtle than that. The chain of e-mails Spears received under an access to information request shows that Spears called NRC media relations, who then made the request of Wolde’s department. Wolde provided written information to his supervisor, but was never asked to talk to the Citizen directly.

Wolde said he doesn’t know why he wasn’t asked to do an interview; it was a decision further up the chain at NRC. But he added that in his view, the Citizen situation was not typical of requests at the time. “I have been with NRC over 18 years, and I have been in touch with the media on and off, depending on the project. I was free to talk whenever it was asked. It was a bit unusual, let me put it that way,” he said.

Vignola said she couldn’t speak to NRC’s process in 2012, given she has only been around for a year. But in general, she said how requests were handled in the government back then depended on many factors, including the ministers and organizations that were involved.

At CSA, the policy is for all scientists to go through media relations first to ensure that the right spokesperson is being selected, said media relations representative Isabelle Lord. Even if a journalist contacts a scientist directly, the scientist always checks first with media relations before responding. But CSA is also sensitive to how quickly media needs to have their requests fulfilled, so the agency works to get back to journalists as quickly as possible – often, within just hours, she added.

CSA scientist Robert Saint-Jean, who cautioned that he is speaking only on behalf of himself as an individual and not on behalf of CSA, said he also hasn’t faced any restrictions when talking with media. “Generally the questions were well defined, and they were within my field of expertise, so there was never any time where I wasn’t allowed to talk about something,” he said. “That is my personal experience. I can’t talk for anybody else, but that is my personal experience.”

Like all CSA scientists, Saint-Jean – whose expertise relates to new science missions studying the Earth’s surface – coordinates all of his interviews on the research through CSA media relations, because that is the departmental policy. The SpaceQ request was an exception, he said, because he is speaking as an individual, and the interview request was made through his union, PIPSC.

While the two scientists interviewed by SpaceQ said they are free to speak freely to the media, not all scientists report this. In a PIPSC survey of its members released earlier this year, 53% of online survey respondents (who were federal scientists) said they cannot speak freely with the media.

This figure is a substantial decrease from 2013, under the Harper administration, when the same survey showed that 90% of respondents faced restrictions. The 2018 survey polled 16,377 federal scientists under PIPSC; roughly 18.5% of these people responded. (In 2013, the response rate was about 26%.)

CSA scientists have also said that one of the key problems they face is their attendance at conferences. The CSA’s flat budget for the past decade or so has restricted travel for many scientists, who say that it is difficult to do collaborations with their peers if they cannot go to conferences and do collaborations face to face.

Tremblay said she has also heard this complaint through the consultation process with scientists, and the agency will do its best to address that after the policy is implemented. However, budgets remain limited and at times the agency has to make tough choices about to send, she said.

She acknowledged it is important to not only have scientists attend conferences, but also do presentations highlighting any key research they have performed in the recent past. “It’s important to have an active role in panels and communicate what we do as much as possible to share what we do, and also get the community engaged,” Tremblay said.

Is SpaceQ's Associate Editor as well as a business and science reporter, researcher and consultant. She recently received her Ph.D. from the University of North Dakota and is communications Instructor instructor at Algonquin College.
Previous Canadian Space Agency to Hold Fall 2018 Space Industry Days in October
Next NorStar Space Data Secures $52 Million in Financing for its GeoSpatial Satellite Constellation 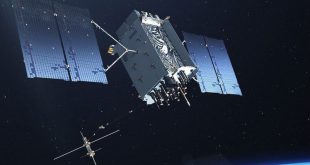