In today’s Ottawa Citizen article “What does $100 billion buy?” they ask fair questions in “… how valuable this research in space has been, and does having a space station really add prestige, or industrial competence, or an innovative edge to a country?” with respect to how Canada benefits and humanity as a whole.
“The space station must impress us on a new level: Treating disease, or bringing new products or technology. Research continues on both fronts; today much of the technology research deals with materials, such as superconductors for the computer industry, which can be studied better in zero-gravity than on Earth.”

However it was just last September that NASA issued a 262 page report on the science conducted on the International Space Station (ISS) between 2000 and 2008. The report detailed more than 100 science experiments ranging from bone studies to materials’ research and outlined experiments that could only done on the ISS.
It is true that the space station science capability was cut when NASA and its partners announced changes in the design of the ISS in 2001. However as the article pointed out, the station is nearly complete and it would be a shame not to continue to using this unique resource. Of course results are expected. The station will most likely be used at least until 2020 so they have 10 years to conduct research. Will there be some breakthroughs that benefit humanity? I would expect so, enough to justify the cost? I think so. NASA alone has counted over 1600 spinoffs from the space station that have benefited the public.

Boucher is an entrepreneur, writer, editor & publisher. He is the founder of SpaceQ Media Inc. and CEO and co-founder of SpaceRef Interactive Inc. Boucher has 20 years working in various roles in the space industry and a total of 28 years as a technology entrepreneur including creating Maple Square, Canada's first internet directory and search engine.
@marckboucher
Previous Optical Illusions – Student Science on the International Space Station
Next This Week in Space For Canada 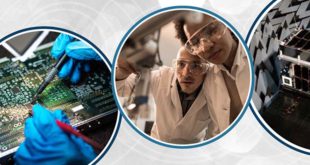