This is a Mosaic of Canada which is made from 121 images captured by Canadian satellite RADARSAT-2. Credit: Canadian Space Agency.
Share

Natural Resources Canada (NRCan) expects a flood of interest for satellite data in the wake of the RADARSAT Constellation (RCM) launch, which flew into space successfully Wednesday (June 12) aboard a SpaceX Falcon 9 rocket that has been to space before.

While the first data will flow from the three satellites no earlier than September, NRCan is already discussing the process for accrediting new users to the RADARSAT image platform. A subset of images will be freely available to the public, while higher-resolution data will be locked for those who have a higher government clearance.

Everyone is eager to see what RCM can do, said Roger De Abreu, NRCan’s section head for radar development and methods. “We’ve got an established group of users and program managers downstream who are anxiously waiting to start receiving this data operationally, and to support their services, and scientists as well who want to get their hands on it in terms of understanding our environment and different processes,” he told SpaceQ.

One of the 14 government departments waiting for data is Agriculture & Agri-Food Canada, which recently released a video showing its applications for RCM – soil water content, crop health and even crop composition. Moreover, De Abreu said, RCM users can look forward to a greater revisit rate than with predecessor RADARSAT-2, since there are three satellites allowing for examination of parts of Canada at least once a day. This will help with quick-moving situations such as floods.

Users of RCM – which is expected to last at least seven years – will benefit from approximately 40 years of radar observations of Canadian soil and waters, dating back to Convair 580 airplane work in the 1970s and then flowing through to satellites RADARSAT (no longer operational) and RADARSAT-2 (which is operating beyond its expected lifespan.) “Everyone is breathing a sigh of relief,” De Abreu said, both that RADARSAT-2 remains operational and that continuity of the same dataset will happen with RCM.

Like the famous Landsat series of the United States, RADARSAT is supposed to provide similar images in similar wavelengths across successive generations of satellites so that users can examine change over years or decades. In Canada’s north, this is particularly important for matters such as examining ice cover, De Abreu said. Successive generations of RADARSAT are more powerful, but the dataset is similar enough that comparisons can be made.

RCM still has a place in a now crowded market for Earth observations, with UrtheCast and Planet among the many new entrants into examining our home planet, he added. Some of these newer companies rely on small CubeSats to perform their observations; the satellites only last a few months or a couple of years, and generally tend to have lower resolution than satellites such as the RADARSAT series.

“All these satellites have their place,” De Abreu said, but added that users of these services give up sensitivity and resolution by using the smaller satellites.

RCM will spend several months in a commissioning phase to ensure all systems are working correctly. This phase not only includes checking on the satellites’ health in orbit, but also upgrading the ground stations NRCan uses to handle the increased data flow from the new spacecraft, De Abreu said.

The prime manufacturer for RCM is MDA which built the satellite under a fixed-price contract of $706 million announced in early January 2013. Prior to MDA getting the Phase D contract, the build phase, RCM costs had escalated from the initial estimate due to design change requests by the customer, the government, who wanted additional features. As well, delays by the government in moving forward with the program increased costs. The final approved cost for the entirety of the RCM program was $1.2 billion. This includes seven years of operations. Additional costs were shared by stakeholder government departments. The original estimated program cost was $600 million as outlined in a 2010 briefing note from the Department of National Defence. The launch was also delayed after a Falcon 9 rocket exploded on the launch pad in 2015 which set off a cascade of launch backlogs. From concept to launch, the program took 15 years.

Is SpaceQ's Associate Editor as well as a business and science reporter, researcher and consultant. She recently received her Ph.D. from the University of North Dakota and is communications Instructor instructor at Algonquin College.
Previous The AIAC Releases Vision 2025 Report and Receives $49 Million From The Government
Next A Summary of the 40th Canadian Symposium on Remote Sensing 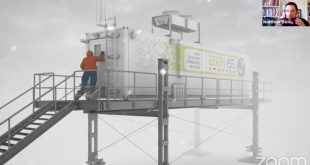 Growing food in extreme environments including on Mars