The Ares1-X is a 327-foot tall rocket and this is the first time a new vehicle has launched from the Kennedy Space Center complex since the first space shuttle launch in 1981. The mission lasted two minutes during which time constant data was received from the rocket.

At about the T+2 minute point in the flight, the upper stage simulator and first stage separated at approximately 130,000 feet over the Atlantic Ocean. The unpowered simulator will splash down in the ocean. The first stage was then fired for a controlled ocean landing with parachutes that allow recovery by one of NASA’s booster recovery ships, while the other ship tracks the upper stage.

Boucher is an entrepreneur, writer, editor & publisher. He is the founder of SpaceQ Media Inc. and CEO and co-founder of SpaceRef Interactive Inc. Boucher has 20 years working in various roles in the space industry and a total of 28 years as a technology entrepreneur including creating Maple Square, Canada's first internet directory and search engine.
@marckboucher
Previous This Week in Space For Canada: October 23rd, 2009
Next Developing a Solid Science Policy: Keynote Presentation at the Canadian Science Policy Conference 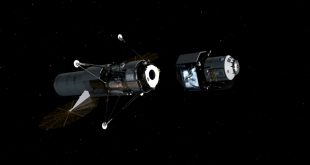 Is this the lunar lander Canadian astronauts will use on the Moon?