Consolidated revenues for the full year 2012 increased to $880 million compared to $761 million for the year ended December 31, 2011. Revenues for the Communications segment were $387 million, up from $238 million for 2011. MDA completed the acquisition of Space Systems/Loral (“SSL”) on November 2, 2012 and the results of SSL are included in the Communications segment from the date of acquisition. Revenues for the Surveillance and Intelligence segment were $493 million compared to $523 million for 2011.
Operating earnings for the full year 2012 increased to $127 million ($3.98 per share) compared to $117 million ($2.99 per share) for last year. Operating earnings is a non-IFRS financial measure that provides a more meaningful way to compare the Company’s financial performance from period to period.
Net earnings under IFRS in 2012 were impacted by certain large, non-operational items that affected comparability of financial results to prior year. These items included transaction costs related to the acquisition of SSL, amortization expense of acquisition related intangible assets and unrealized mark-to-market adjustments on share-based compensation awards. After giving effect to these adjustments, net earnings from continuing operations for the full year 2012 were $86 million ($2.71 per share) compared to $130 million ($3.31 per share) for 2011.
With the acquisition of SSL, the Company ended the year with funded order backlog of $2.2 billion compared with $805 million at December 31, 2011. Order backlog at December 31, 2012 did not include the contract signed with the Canadian Space Agency in January 2013 and valued at $706 million to build, launch and provide initial operations for the RADARSAT Constellation Mission.
The Company has declared a semi-annual dividend of $0.65 per common share, payable on March 28, 2013 to common shareholders of record at the close of business on March 15, 2013.
Financial Highlights 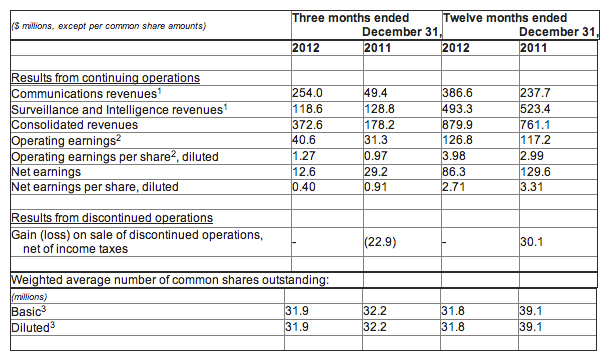 MDA’s audited consolidated financial statements and management’s discussion and analysis for the twelve months ended December 31, 2012 are available here.
Note: The first two months of 2013 have seen the following events:
– MDA received a $706 million contract with the Canadian Space Agency to build, launch and provide initial operations for the RADARSAT Constellation Mission (RCM). The contract is expected to extend over a period of seven years and brings MDA’s current backlog to approximately $2.9 billion.
– MDA received a CA$2.6 million contract from NASA’s Johnson Space Center to extend its support of the Robotic Work Station on the International Space Station.
– The Sapphire satellite developed by MDA for Canada’s Department of National Defence (DND) was launched into its proper orbit
– MDA received a CA$15.8 million contract from the Canadian Space Agency (CSA) for the preliminary design of an advanced technology solution for NASA’s New Frontiers Program-OSIRIS-REx, the next planetary science mission to another celestial body in our solar system. Total contract value for initial phases received to-date are valued at $19 million.