Artist's impression of the ExoMars rover and surface platform on the surface of Mars. Credit: ESA/ATG medialab.
Share

According to a new research report by Euroconsult, global government spending on space exploration will see modest growth from US$14.6B in 2017 to US$20B by 2027.

The report, Prospects for Space Exploration, states that “global government investment in space exploration totalled $14.6 billion in 2017, a 6% increase compared to 2016” and that “fifteen leading space programs worldwide are estimated to contribute to this global investment with the U.S. accounting for 74% of the total.”

Government space exploration spending makes up less than 4% of the global space economy which was reported to be US$383.5 billion in 2017 according to the Space Foundation.

Natalia Larrea Brito, Senior Consultant at Euroconsult and editor of the report said “future funding for space exploration is expected to grow to support the ambitious plans of the next decade. Nonetheless, national investments will remain constrained by their public finance environments that should dictate realistic and pragmatic investment strategies. Space exploration is attracting not only the interest of an increasing number of governments but also the private sector; start-ups to large companies seek to exploit the commercial potential of exploration activities. Space agencies are increasingly seeking to leverage partnerships with the private sector to achieve their goals more cost-effectively while fostering sustainable space exploration.”

The key findings of the report are:

Of note, the report cites that presently there are 80 space exploration missions that will be launched in the next decade as compared to 19 the previous decade. That’s a healthy increase and includes for the first time, commercial missions.

Of those 80 missions Euroconsult is expecting 63% will be government missions (50), while the balance, 37%, will be commercial (30), primarily to the moon.

In 2016 the Organisation for Economic Co-operation and Development (OECD) released a report called Space and Innovation. The report included government spending in space as a percentage of Gross Domestic Product (GDP) and compared 2010 with 2015 data. It indicated that Canada had regressed in its spending while 9 of the 17 countries listed had increased their spending as a percentage of GDP. The figures don’t include emerging space nations such as Australia and others who have begun to increase their spending.

Based on what the Canadian Space Agency spent in 2016 and 2017 I can safely say the decline by Canada in spending as a percentage of GDP continues.

Allons-y to the moon

The news is not all gloomy though. The Canadian Space Agency(CSA) is preparing the groundwork to participate in a U.S. led long term return to the moon through the Lunar Orbiter Platform-Gateway program.

That participation has yet to get a firm commitment from the government, though rumours that an announcement could be made this fall seem to be growing.

Certainly the Don’t Let Go Canada Coalition led by MDA, is pushing hard for a funded space strategy along with a commitment for the Lunar Orbiter Platform-Gateway program.

There is some irony in how Canada’s space program has fallen on harder times. Marc Garneau, the Transport Minister and former astronaut and President of the CSA was to have been the champion for space advocates when the Liberal government came to power. And while he’s publicly stated that he supports the space program and lets his Cabinet colleagues know he supports Canada’s space endeavours, it’s clear his position, stature and support have not swayed them.

Many might not remember that in 2001 Marc Garneau, then the CSA Executive Vice-President, famously said “Allons-y! Let’s go to Mars” as the CSA was to begin an effort for Canada to lead its first mission to another planetary body. However, a Canadian led space exploration mission to the moon, Mars or anywhere has yet to happen.

In the intervening years Japan, China, and India have joined Russia, the European Space Agency and the U.S. in having successfully launched and completed planetary missions.

Of the 50 government led planetary exploration missions Euroconsult projects to occur in the next decade, not one will be lead by Canada. That’s a sad state of affairs considering Canada’s historical place in space and that in 2001 the rallying cry at the Canadian Space Agency was Allons-y.

Boucher is an entrepreneur, writer, editor & publisher. He is the founder of SpaceQ Media Inc. and CEO and co-founder of SpaceRef Interactive Inc. Boucher has 20 years working in various roles in the space industry and a total of 28 years as a technology entrepreneur including creating Maple Square, Canada's first internet directory and search engine.
@marckboucher
Previous 56 Years Ago Today Canada Became Only the 3rd Nation to Build and Have Launched a Satellite
Next All Talk – No Action: Making the Case for Space in Canada 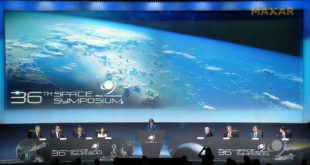