The Canadian government made a calculated bet today that a potential $600 million contribution to Telesat will help it win significant marketshare in the low Earth orbit satellite constellation global competition.

Today’s announcement at the Canadian Aviation and Space Museum was couched in language designed to appeal to the electorate. Promising and delivering on high-speed broadband with an emphasis on rural and remote regions is important to this government.

The government went much further than that though. By making today’s announcement the government has firmly placed its bet on Telesat to deliver on that promise of high-speed broadband.

It’s a bet that will give Telesat a fighting chance against foreign competitors including OneWeb, SpaceX’s Starlink, and Kuiper Systems which is owned by Amazon.

Both OneWeb and SpaceX are ahead of Telesat with respect to infrastructure and satellites already in orbit.

OneWeb this week opened its state-of-the-art manufacturing facility on Florida’s Space Coast which will mass-produce their satellites in assembly style fashion. Earlier this year they launched their first six satellites.

At this time Telesat has one demonstration satellite in orbit and will announce within a few months which one of two competing bids will build its fleet of 298 satellites.

The need for broadband

In a statement the government provide on today’s announcement, Innovation, Science and Economic Development Minister Navdeep Bains said “access to high-speed Internet is not a luxury; it is essential, and all Canadians should have access to it regardless of where they live. Rural and remote areas need this service to do business, upgrade their education and build stronger communities. Today’s announcements will provide us with a glimpse of what future connectivity of rural and remote communities will look like. It will also ensure that innovative Canadian companies, like Telesat and its partners, remain world leaders, creating highly skilled jobs in Canada.”

The government is trying to have broadband connectivity available to all Canadians by 2030.

What’s in the deal?

It is estimated that to build its constellation of 298 satellites Telesat will need over $1 billion. They’ve been trying for some time now to raise the needed capital to make this transformational program happen. And make no mistake about it, Telesat needs this program to succeed to keep the company competitive into the future.

To get the program to the finish line, Telesat will need to raise funds from the equity and debt markets.

Today though, the government gave a helping hand to Telesat in the form of $85 million from the Strategic Innovation Fund so that Telesat can “build and test innovative technologies for its low-earth-orbit (LEO) satellite constellation.”

The details of the distribution of those funds was not outlined. We do know that in the 2018 Budget the government had committed $100 million over five years from the Strategic Innovation Fund for projects such as this. So this funding is a directly related to that previous announcement.

The big news from today’s announcement is that the government will provide up to $600 million in additional funding over 10 years “subject to reaching definitive terms of a contribution agreement.” To that end the government and Telesat have signed a Memorandum of Understanding (MOU).

The MOU’s goal is to hammer out a final agreement for that $600 million contribution over the next few months. The MOU is valid for one year, can be renewed and also be terminated.

Telesat’s CEO Dan Goldberg said the $600 million “covers a 10-year period from the time that the constellation is in service.”

I will point out the obvious that for Telesat to get the additional funding an agreement has to signed before the election or afterwards if the Liberals are re-elected. There’s no telling at this point if another any party other than the Liberals would follow through on this MOU.

Should the funding be secured, Telesat said it will generated $1.2 billion in revenue over 10 years which includes the $600 million.

Over the next five years Telesat will invest $215 million for research and development.

Telesat also said with the additional funding they will create and maintain 485 jobs over the next decade. They have also promised to invest $2.4 million for young Canadians in the form of science, technology, engineering and math (STEM) scholarships and other undefined activities. They will also create “40 new co-op learning opportunities for post-secondary students and expand collaborations with Indigenous communities to address broadband service gaps and needs.”

Boucher is an entrepreneur, writer, editor & publisher. He is the founder of SpaceQ Media Inc. and CEO and co-founder of SpaceRef Interactive Inc. Boucher has 20 years working in various roles in the space industry and a total of 27 years as a technology entrepreneur including creating Maple Square, Canada's first internet directory and search engine.
@marckboucher
Previous Junior Astronauts Consultants RFP Amended
Next Fireball As Bright as the Moon Captured on Camera by Western University Researchers

What are the Implications of LEO Satellite Constellations for Rural and Remote Communities? 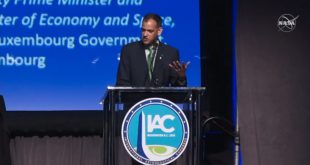