The roadmap is essentially a step-by-step plan of how a group of 15 national space agencies plans to launch humans past low earth orbit, where the International Space Station (ISS) is, into deep space.

“Mars is the ultimate destination,” Says Pierre Jean. The current director of space exploration and strategic planning for the Canadian Space Agency (CSA) served as the CSA program manager for the International Space Station for six years.

He was speaking on a webinar last Wednesday, hosted by the Canadian Aeronautics and Space Institute (CASI). The hour-long session delved into deep space exploration, and Canada’s possible role in future initiatives.

“It doesn’t mean Mars is going to happen tomorrow, it just means that by keeping that destination in place, we have to manage and develop a sustainable route to take us there.”

Jean outlined a few steps, from the roadmap, on how this would happen.

The ISS, which marked 17 years of continuous human occupation on November 2, is the starting place for human space exploration, says Jean. The space agencies can test systems, technologies, and human health for issues that could arise in longer space flight, with the convenience of being close to home.

Low Earth orbit has also become commercial, with the US introducing vehicles by Boeing and SpaceX, to take crew between Earth and the ISS in the near future.

The next step is travel to the lunar vicinity. Agencies are proposing a deep space gatway to orbit the moon, as the ISS does Earth.

This outpost would use current technologies to test them for extended deep space flight, and would serve as a launch platform for human or robotic missions to the surface of the moon, or beyond lunar orbit.

In September NASA and its Russian counterpart signed a joint statement reflecting the desire to further the gateway project.

From the Deep Space Gateway, a deep space transport could be launched, such as the Orion spacecraft, currently in development by NASA.

The gateway is still in its conceptual phases, and more will be known after the new NASA administrator is confirmed which could be very soon.

Current components of the tentative design for the gateway include;

This conceptual design is meant to support four crew members for up to 42 days.

This would be the gateway, says Jean, to deep space travel for human and robot alike. He also says that this is the first definable mission in the roadmap to Mars.

Jean notes that this could be an opportunity for the CSA to contribute another robotic arm, a follow up to Canada’s signature technological contribution to human space travel thus far: the original Canadarm and Canadarm2.

The first arm was aboard the now retired space shuttle. It was maintained on Earth and had limited mobility. The second arm remains in space and is maintained by astronauts in orbit. The third iteration could be self-maintaining says Jean, capable of removing its own components or spare parts, itself or with a small dextrous arm, similar to Dextre, the robotic handyman on the ISS.

Jean says the Canadian government has asked the CSA to investigate areas Canada could contribute to future deep space exploration.

The CSA recently released a request for information, looking for ideas for cislunar space travel, or travel between low earth orbit and the moon. This is not a call for proposals, merely probing the waters of Canadian capacity and imagination for technologies, products or services that could help robot or human travel to the lunar surface. The request was recently amended to put the closing date at December 15.

One area which could be of interest to the CSA is the health aspect. There are human health risks with space travel, such as bone and muscle density issues, as well as nutrition. As deep space goes beyond the Van Allen radiation belt, which shields Earth and the ISS from some of space’s harsher radiation, radiation is a major concern for astronauts spending extended periods away from Earth orbit. Jean says that the CSA feels that this is an untapped area as Canada has a lot of medical capacity.

Jean says, “We’re looking for visible contributions, critical contributions, things that can be scalable that showcase Canadian innovation that will lead to flights for our astronauts that are our greatest ambassadors, and that’ll obviously bring back everyday benefits for Canadians.”

Once the gateway’s established, a launch onto the lunar surface could happen by 2026, with a rover going down, gathering samples, and returning them to humans on the deep space habitat, says Jean.

The next step after the moon would be a Mars flyby, which would still be at least 2-3 years beyond 2026.

Human boots on Mars isn’t projected to happen until at least the 2030’s, at least from the world’s space agencies. Private ventures, like SpaceX, say they can do it sooner. But that is a claim that needs a credible plan in place to be believed.

The Deep Space Gateway as envisioned right now would in part be supported by NASA’s Space Launch System (SLS). While NASA has spent billions on SLS it is several years behind schedule and it’s unclear when NASA’s new rocket will actually be ready to fly.

Another takeaway from the webinar: A tangential part of this deep space exploration plan is near-Earth object exploration, which is already underway. The OSIRIS-REx* spacecraft, launched in September 2016, is on its way to nearby near Earth asteroid Bennu to collect samples and return them to Earth. Canada contributed a LIDAR to create a 3D map of the asteroid and to help with navigation.

With respect to the CSA’s involvement in space medical research they are holding a national forum on November 29 and 30 at CSA headquarters. The forum, Space, Health and Innovation: Emerging challenges, new opportunities and benefits to society, will see about 100-200 medical professionals, companies, small emerging companies, share their thoughts and ideas.

* This Thursday, the SpaceQ podcast will be feature Dr. Michael Daly, principal investigator of the Canada’s science team for the OSIRIS-Rex mission.

Contributed by: Bronwyn Beairsto is a graduate of the Masters of Journalism program at Carleton University and was an apprentice with SpaceQ. 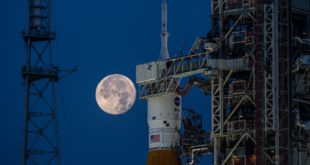